March 3, 2022 - An ultraviolet spectrograph (UVS) designed and built by Southwest Research Institute (SwRI) is the first scientific instrument to be delivered for integration onto NASA’s Europa Clipper spacecraft. Scheduled to launch in 2024 and arrive in the Jovian system by 2030, Europa Clipper will conduct detailed reconnaissance of Jupiter’s moon Europa and investigate whether it could harbor conditions suitable for life.

Europa-UVS will be one of nine science instruments in the mission payload. The instrument collects ultraviolet light with a telescope and creates images to help determine the composition of Europa’s atmospheric gases and surface materials.

Once it arrives, Europa Clipper will orbit Jupiter and ultimately perform repeated close flybys of the icy moon. Previous observations show strong evidence for a subsurface ocean of liquid water that could host conditions favorable for life.

“It has been a huge team effort to get Europa-UVS built, tested and delivered,” said Matthew Freeman, project manager for Europa-UVS and a group leader in SwRI’s Space Science and Engineering Division. “Europa-UVS is the sixth in a series of SwRI-built ultraviolet spectrographs, and it benefits greatly from the design experience gained by our team from the Juno-UVS instrument, which is currently operating in Jupiter’s harsh radiation environment.”

SwRI has decades of experience designing and building instruments for space missions. SwRI has provided ultraviolet spectrographs for other spacecraft, including ESA’s Rosetta comet orbiter, NASA’s New Horizons spacecraft to Pluto and the Kuiper Belt, the Lunar Reconnaissance Orbiter (LRO), the aforementioned Juno spacecraft now orbiting Jupiter, and ESA’s Jupiter Icy Moons Explorer (JUICE) planned for a 2023 launch to orbit both Jupiter and its moon Ganymede.

In addition to performing atmospheric studies, Europa-UVS will also search for evidence of potential plumes erupting from within Europa.

“Europa-UVS will hunt down potential plumes spewing from Europa’s icy surface and study them,” said SwRI’s Dr. Kurt Retherford, principal investigator for the UVS instrument. “Europa-UVS will search for and characterize plumes in terms of activity and the nature of subsurface water reservoirs. We will study how the plumes behave — when they start, stop and expand outward far into space.”

Southwest Research Institute’s Ultraviolet Spectrograph (UVS) was the first instrument delivered for integration into NASA’s Europa Clipper spacecraft. The instrument collects ultraviolet light to study the composition of the atmospheric gases and surface materials of Europa, one of Jupiter’s largest moons with a suspected subsurface ocean. 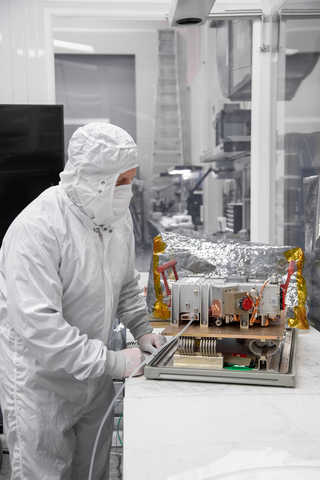