August 5, 2009 - A new method developed at Southwest Research Institute® (SwRI®) for depositing super-hard, ultra-thick coatings on components has received a 2009 R&D 100 Award. R&D Magazine selected SwRI's Plasma Enhanced Magnetron Sputter (PEMS) technology as one of the 100 most significant technological achievements of the past year.

Components such as jet engine blades and helicopter rotor blades operate under harsh conditions, and the surfaces of these objects are often subject to severe solid particle or liquid droplet erosion. To protect these components from erosion, abrasion and wear, a surface coating is needed that demonstrates both high hardness and toughness.

"Most commercially available coatings are fairly hard, but not tough," said Dr. Ronghua Wei, an Institute scientist in SwRI's Mechanical and Materials Engineering Division and principal developer of the PEMS technology. "The SwRI-developed super-hard, ultra-thick nanocomposite coating produced using our PEMS technology provides both, and has shown superior resistance in comparisons to many commercial coatings."

SwRI's PEMS technology is an advanced variation of the physical vapor deposition process by which coatings can be deposited on the surface of various components. The PEMS process introduces a global plasma, which allows a thorough cleaning of a component's surface to remove oxide and surface contaminants before the coating is applied, thus ensuring that the coating tightly adheres to the surface. During the process, this global plasma enhances the ion bombardment of the coating. As a result, very dense and very hard coatings can be achieved.

Also, because a high ion flux is used, no external heaters are required, a distinct advantage over conventional methods. The high processing temperatures required for other methods often degrade the fatigue strength of the component's material.

While designed initially for improving the surface properties of aero-engine components, land-based turbine blades, and helicopter rotor blades and leading edges, the PEMS technology can be applied to a variety of components. These include oil and gas production valves and pumps; military weaponry components used in sandy or dusty environments; heavy-duty machinery engine parts; food processing components; and gear cutters, drill bits, lathe tools and end mills, among others.

View a video clip of the product. 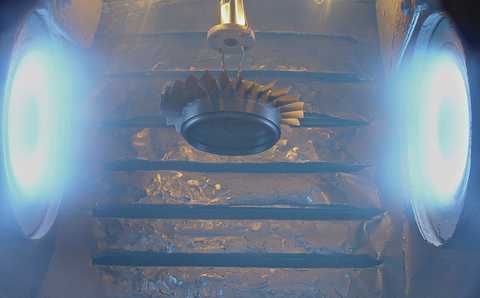