San Antonio – April 14, 2017 – Southwest Research Institute (SwRI) helped develop and recently completed initial testing of a field-deployable treatment system that destroys chemical warfare agents (CWAs) using locally available resources. The modular unit, designed to fit into a large shipping container for easy transport, includes two pollution abatement configurations – one wet and one dry process – that can be deployed depending on the available resources of the location.

Because current chemical destruction methods produce hazardous byproducts during the neutralization process, the Defense Advanced Research Projects Agency (DARPA) issued a call for innovative systems that can neutralize chemicals or dangerous material without creating hazardous waste. The resulting modular mobile unit can be easily transported and deployed in a field setting close to where hazardous chemicals may be stored.

“It is in our national interest to have a field operable unit that can safely dispose of chemical warfare agents and other dangerous chemicals on the front lines in a timely manner,” said Darrel Johnston, a senior program manager in SwRI’s Chemistry and Chemical Engineering Division. “We began development of the soil scrubber system in June 2016 and delivered a proof-of-concept system in February 2017.”

The performance of both the wet and the dry scrubber units were independently verified and validated in recent tests performed in Canada. When the dry soil-based scrubber was interfaced with the Canadian company’s plasma torch front end, the system demonstrated a more than 99.9999 percent destruction of simulated CWAs and effective scrubbing of acid gases.

The systems are scheduled to be tested this summer with authentic CWAs, in both the liquid-scrubber and soil-scrubber configurations. 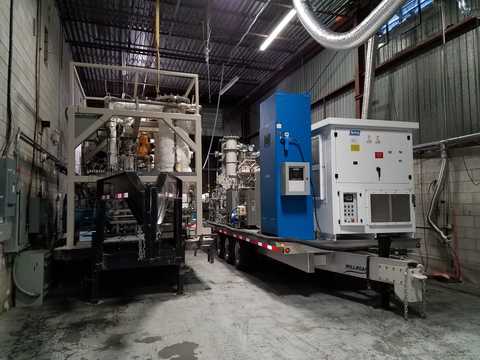