San Antonio — July 26, 2016 — A team of scientists led by Southwest Research Institute (SwRI) made a puzzling observation while studying the size and distribution of craters on the dwarf planet Ceres.Ceres is the largest object in the tumultuous Main Asteroid Belt between Mars and Jupiter. Collision models predicted Ceres should have accumulated up to 10 to 15 craters larger than 400 kilometers (250 miles) wide, and at least 40 craters larger than 100 km (62 miles) wide. Instead, NASA’s Dawn spacecraft found only 16 craters larger than 100 km, and none larger than the 280 km (175 miles) across.

Crater size and distribution offer planetary scientists important clues to the age, makeup, and geologic history of planets and asteroids. Ceres is believed to have originated about 4.5 billion years ago at the dawn of our solar system. It grew in size through a history of accretionary collisions of smaller bodies. Some of its largest siblings were subsequently incorporated into larger objects, such as planets. Today, Ceres and Main Belt asteroids remain as the leftovers of the planet-building process.

Although Ceres endured the most violent phase of the solar system’s collision-prone past, images of its surface taken by the Dawn spacecraft showed plenty of small impact craters, but the largest well-defined crater is only about 280-km in diameter. This defied most models of crater size and distribution and is at odds with what is known from previously imaged asteroids. For example, Dawn images of the asteroid Vesta, only about half the size of Ceres, revealed huge craters, including one 500 kilometers (300 miles) in diameter, covering almost an entire side of that asteroid.

“We concluded that a significant population of large craters on Ceres has been obliterated beyond recognition over geological time scales, likely the result of Ceres’ peculiar composition and internal evolution,” said lead investigator Dr. Simone Marchi, a senior research scientist in SwRI’s Space Science and Engineering Division. A closer look at Ceres’ topography revealed subtle clues to a possible solution. Up to three roughly circular, shallow basins as much as 800 km (500 miles) wide may lie hidden beneath a surface subsequently marked with small craters.

“These depressions — or planitiae — may be ‘relict’ impact basins, left over from large collisions that took place early in Ceres’ history,” Marchi said. This implies that the predicted enormous craters may have indeed once marked the surface of Ceres. “It is as though Ceres cures its own large impact scars and regenerates new surfaces, over and over.”

The scientists think Ceres’ missing large craters may have been erased over time as a deep subsurface ice-rich layer or low viscous material caused the crater rims and bowls to relax, or that cryolava may have flowed across the surface. This process, however, may have not operated as efficiently for the largest, deepest impact features.

“Regardless of the specific mechanism(s) for crater removal, our result requires that large crater obliteration was active well after the late heavy bombardment era, or about 4 billion year ago. This conclusion reveals that Ceres’ cratering record is inextricably linked to its peculiar composition and internal evolution,” Marchi said.

Marchi is lead author of a paper, “The Missing Large Impact Craters on Ceres,” published in the July 26, 2016, issue of Nature Communications. 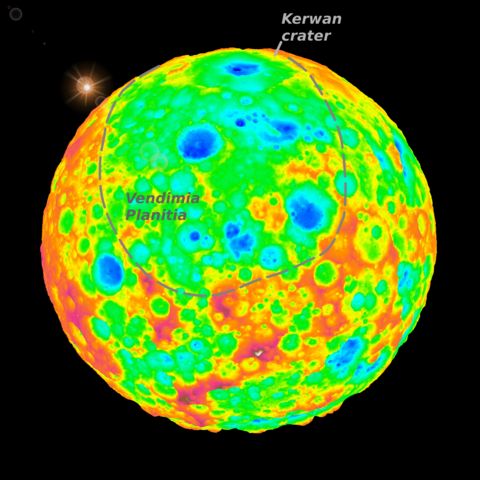