San Antonio — May 05, 2015 — For the first time, scientists have imaged thunder, visually capturing the sound waves created by artificially triggered lightning. Researchers from Southwest Research Institute (SwRI) are presenting the first images at a joint meeting of American and Canadian geophysical societies in Montreal, Canada, May 3-7.

“Lightning strikes the Earth more than 4 million times a day, yet the physics behind this violent process remain poorly understood,” said Dr. Maher A. Dayeh, a research scientist in the SwRI Space Science and Engineering Division. “While we understand the general mechanics of thunder generation, it’s not particularly clear which physical processes of the lightning discharge contribute to the thunder we hear. A listener perceives thunder largely based upon the distance from lightning. From nearby, thunder has a sharp, cracking sound. From farther away, it has a longer-lasting, rumbling nature.”

Although people see it as a flashing bolt, lightning begins as a complex process of electrostatic charges churning around in storm clouds. These charges initiate step leaders, branching veins of electricity propagating down, which subsequently lead to a main discharge channel. That channel opens a path to nearly instantaneous return strokes, which form the lightning flash as we see it. By studying the acoustic power radiated from different portions of the lightning channel, researchers can learn more about the origins of thunder as well as the energetic processes associated with lightning.

“Thunder and lightning are fascinating, wild, and unpredictable,” said Dayeh. “Because of their erratic nature, the phenomena are best studied using triggered events.” The technique involves launching a small rocket trailing a grounded copper wire into thunderclouds. The copper wire provides a conductive channel and creates a predictable path for lightning, allowing scientists to precisely focus their instruments and perform repeatable experiments close to the discharge channel. Using SwRI internal research funding, Dayeh led a proof-of-concept experiment to image the acoustic signature of thunder. SwRI conducted experiments at the International Center for Lightning Research and Testing at the University of Florida, Gainesville, taking advantage of the state’s claim to the most lightning strikes per year in the U.S.

Dayeh designed a large, sophisticated array of microphones to study the acoustic signature of thunder. Fifteen microphones, spaced one meter apart, were lined up 95 meters away from the rocket launch pad where the triggered lightning would strike. To image the vertical profile of the bolt, he used post-signal processing techniques and directional amplification of the data signals captured by the microphone array.

“At first I thought the experiment didn’t work,” said Dayeh. “The initial constructed images looked like a colorful piece of modern art that you could hang over your fireplace. But you couldn’t see the detailed sound signature of lightning in the acoustic data.”

However, when Dayeh looked at the different sound frequency bands, he saw that the images cleared up at higher frequencies. The technique revealed a distinct signature of thunder generated by the lightning strike. Future experiments could allow scientists to study the probable acoustic signatures of current pulses, step leader branches, and discharge channel zigzags independently.

On May 5 at 11:30 a.m. EDT, a press conference will highlight this research at the 2015 Joint Assembly at the Palais des congrès de Montréal, located at 201 Viger Street West, Montreal, Canada. This meeting is cosponsored by the American Geophysical Union, Canadian Geophysical Union, the Geological Association of Canada, and the Mineralogical Association of Canada. For this research, Dayeh collaborated with groups from the University of New Hampshire, Florida Institute of Technology, and the University of Florida. 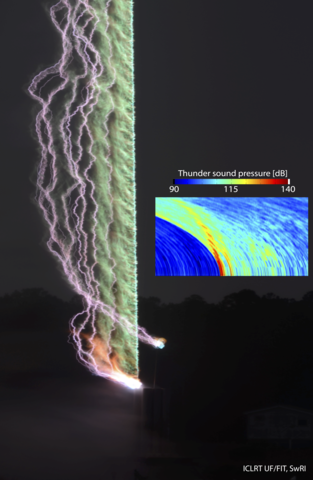 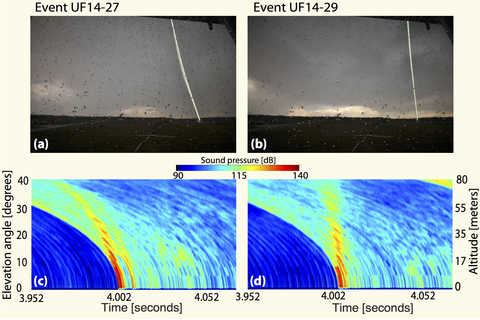