January 19, 2022 — A Southwest Research Institute scientist set out to prove that the tiny, innermost moon of Saturn was a frozen inert satellite and instead discovered compelling evidence that Mimas has a liquid internal ocean. In the waning days of NASA’s Cassini mission, the spacecraft identified a curious libration, or oscillation, in the moon’s rotation, which often points to a geologically active body able to support an internal ocean.

“If Mimas has an ocean, it represents a new class of small, ‘stealth’ ocean worlds with surfaces that do not betray the ocean’s existence,” said SwRI’s Dr. Alyssa Rhoden, a specialist in the geophysics of icy satellites, particularly those containing oceans, and the evolution of giant planet satellites systems.

One of the most profound discoveries in planetary science over the past 25 years is that worlds with oceans beneath layers of rock and ice are common in our solar system. Such worlds include the icy satellites of the giant planets, such as Europa, Titan and Enceladus, as well as distant planets like Pluto. Worlds like Earth with surface oceans must reside within a narrow range of distances from their stars to maintain the temperatures that support liquid oceans. Interior water ocean worlds (IWOWs), however, are found over a much wider range of distances, greatly expanding the number of habitable worlds likely to exist across the galaxy.

“Because the surface of Mimas is heavily cratered, we thought it was just a frozen block of ice,” Rhoden said. “IWOWs, such as Enceladus and Europa, tend to be fractured and show other signs of geologic activity. Turns out, Mimas’ surface was tricking us, and our new understanding has greatly expanded the definition of a potentially habitable world in our solar system and beyond.”

Tidal processes dissipate orbital and rotational energy as heat in a satellite. To match the interior structure inferred from Mimas’ libration, tidal heating within the moon must be large enough to keep the ocean from freezing out but small enough to maintain a thick icy shell. Using tidal heating models, the team developed numerical methods to create the most plausible explanation for a steady-state ice shell between 14 to 20 miles thick over a liquid ocean.

“Most of the time when we create these models, we have to fine tune them to produce what we observe,” Rhoden said. “This time evidence for an internal ocean just popped out of the most realistic ice shell stability scenarios and observed librations.”

The team also found that the heat flow from the surface was very sensitive to the thickness of the ice shell, something a spacecraft could verify. For instance, the Juno spacecraft is scheduled to fly by Europa and use its microwave radiometer to measure heat flows in this Jovian moon. This data will allow scientists to understand how heat flow affects the icy shells of ocean worlds such as Mimas, which are particularly interesting as NASA’s Europa Clipper approaches its 2024 launch.

“Although our results support a present-day ocean within Mimas, it is challenging to reconcile the moon’s orbital and geologic characteristics with our current understanding of its thermal-orbital evolution,” Rhoden said. “Evaluating Mimas’ status as an ocean moon would benchmark models of its formation and evolution. This would help us better understand Saturn’s rings and mid-sized moons as well as the prevalence of potentially habitable ocean moons, particularly at Uranus. Mimas is a compelling target for continued investigation.”

Rhoden is co-leader of NASA’s Network for Ocean Worlds Research Coordination Network and previously served on the National Academies’ Committee on Astrobiology and Planetary Science. A paper describing this research was published online in Icarus and can be accessed at https://doi.org/10.1016/j.icarus.2021.114872. 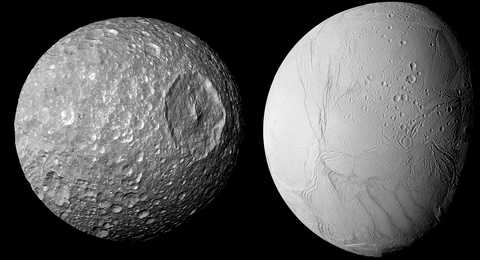