October 18, 2021 — Southwest Research Institute scientists are serving as guest editors of a special issue of Elements Magazine International, exploring interdisciplinary views on exoplanets, which are any planets beyond our solar system. The issue contains seven articles by 19 authors and gives a diverse overview of exoplanets, reviewing observations made about their geology, composition, atmosphere and potential habitability. SwRI Senior Research Scientist Dr. Natalie Hinkel and Research Scientist Dr. Cayman Unterborn collaborated on the special issue with Dr. Oliver Shorttle, a lecturer at the University of Cambridge.

“The issue is meant to be a primer for anyone with an interest in exoplanets,” Unterborn said. “It’s written at a graduate student level to make it accessible to a wide community of scientists.”

Hinkel, Unterborn and Shorttle were motivated to create the special issue as a way of expanding scientific understanding of exoplanets. Noting that most scientists who study exoplanets are astronomers, they reached out to researchers from other disciplines to curate a series of articles that offered a more varied, detailed view of worlds beyond our solar system.

“To really understand an exoplanet, we need people from different fields coming together,” Hinkel said. “We know a great deal about our solar system and our own planet, but exoplanets are so very far away. It’s a challenge to study these objects, but that distance doesn’t preclude us from understanding the chemistry or the atmosphere of an exoplanet. This field has grown rapidly in the past few years because the idea of finding another Earth or life on other planets is very exciting.”

Hinkel specializes in stellar elemental abundances to study the variability in Sun-like stars and the interplay between the compositions of stars and orbiting exoplanets. Unterborn is an exogeoscientist specializing in the interior composition and dynamics of rocky exoplanets. They worked with Shorttle on the issue for roughly 18 months, identifying a series of authors from a diverse array of disciplines and editing the articles produced. Hinkel and Unterborn also worked with Dr. Keith Putirka of California State University, Fresno, and Dr. Caroline Dorn of the University of Zurich on their own article about the composition of rocky exoplanets.

“One of the few things we can observe directly about exoplanets is their size,” Unterborn said. “If you want to know what’s going on inside the planet, you have to know what elements are present. A lot of exoplanets are not particularly comparable to objects in our solar system. That makes exoplanet composition very important to understand.”

The issue will also cover topics such as exoplanet atmospheres and geodynamics as well as their potential to harbor life.

The special issue of Elements Magazine International will be available on October 18 and can be accessed online here: http://elementsmagazine.org. 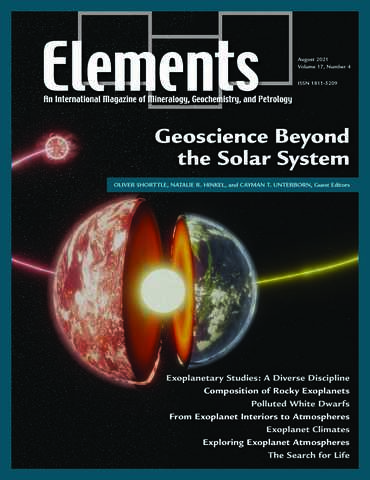