San Antonio – April 13, 2017 – Scientists from Southwest Research Institute (SwRI) have discovered hydrogen gas in the plume of material erupting from Saturn’s moon Enceladus. Analysis of data from NASA’s Cassini spacecraft indicates that the hydrogen is best explained by chemical reactions between the moon’s rocky core and warm water from its subsurface ocean. The SwRI-led team’s discovery suggests that Enceladus’ ocean floor could include features analogous to hydrothermal vents on Earth, which are known to support life on the seafloor.

“Hydrogen is a source of chemical energy for microbes that live in the Earth’s oceans near hydrothermal vents,” said SwRI’s Dr. Hunter Waite, principal investigator of Cassini’s Ion Neutral Mass Spectrometer (INMS). “Our results indicate the same chemical energy source is present in the ocean of Enceladus. We have not found evidence of the presence of microbial life in the ocean of Enceladus, but the discovery of hydrogen gas and the evidence for ongoing hydrothermal activity offer a tantalizing suggestion that habitable conditions could exist beneath the moon’s icy crust.”

Waite is the lead author of “Cassini Finds Molecular Hydrogen in the Enceladus Plume: Evidence for Hydrothermal Processes,” published in the April 14, 2017, issue of the journal Science.

“The amount of molecular hydrogen we detected is high enough to support microbes similar to those that live near hydrothermal vents on Earth,” said SwRI’s Dr. Christopher Glein, a co-author on the paper and a pioneer of extraterrestrial chemical oceanography. “If similar organisms are present in Enceladus, they could ‘burn’ the hydrogen to obtain energy for chemosynthesis, which could conceivably serve as a foundation for a larger ecosystem.”

During Cassini’s close flyby of Enceladus on Oct. 28, 2015, INMS detected molecular hydrogen as the spacecraft flew through the plume of gas and ice grains spewing from cracks on the surface. Previous flybys provided evidence for a global subsurface ocean residing above a rocky core. Molecular hydrogen in the plumes could serve as a marker for hydrothermal processes, which could provide the chemical energy necessary to support life. To search for hydrogen specifically native to Enceladus, the spacecraft flew particularly close to the surface and operated INMS in a specific mode to minimize and quantify any spurious sources.

“We developed new operations methods for INMS for Cassini’s final flight through Enceladus’ plume,” said SwRI’s Rebecca Perryman, the INMS operations technical lead. “We conducted extensive simulations, data analyses, and laboratory tests to identify background sources of hydrogen, allowing us to quantify just how much molecular hydrogen was truly originating from Enceladus itself.”

Scientists also considered other sources of hydrogen from the moon itself, such as a preexisting reservoir in the ice shell or global ocean. Analysis determined that it was unlikely that the observed hydrogen was acquired during the formation of Enceladus or from other processes on the moon’s surface or in the interior.

“Everything indicates that the hydrogen originates in the moon’s rocky core,” Waite said. “We considered various ways hydrogen could leach from the rock and found that the most plausible source is ongoing hydrothermal reactions of rock containing reduced minerals and organic materials.”

INMS, built by NASA’s Goddard Space Flight Center, is operated by an international team of scientists headed by Waite. The Cassini-Huygens mission is a cooperative project of NASA, the European Space Agency and the Italian Space Agency. NASA’s Jet Propulsion Laboratory, Pasadena, California, a division of Caltech, manages the mission for NASA’s Science Mission Directorate in Washington, D.C. The Cassini orbiter was designed, developed, and assembled at JPL. 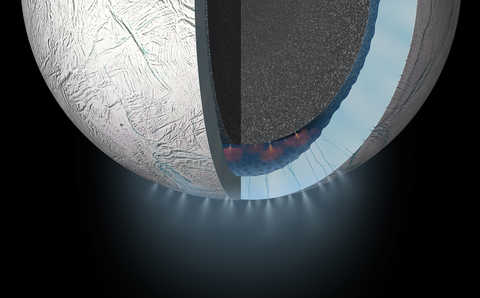