San Antonio, Texas — May 26, 2016 — Using radar data collected by NASA’s Mars Reconnaissance Orbiter, a Southwest Research Institute-led team found evidence of an ice age recorded in the polar deposits of Mars. Ice ages on Mars are driven by processes similar to those responsible for ice ages on Earth, that is, long-term cyclical changes in the planet’s orbit and tilt, which affect the amount of solar radiation it receives at each latitude.

“We found an accelerated accumulation rate of ice in the uppermost 100 to 300 meters of the polar cap,” said Dr. Isaac Smith, a postdoctoral researcher at SwRI and lead author of a paper published in the May 27 issue of Science. “The volume and thickness of ice matches model predictions from the early 2000s. Radar observations of the ice cap provide a detailed history of ice accumulation and erosion associated with climate change.”

Like Earth, modern-day Mars experiences annual rotation and seasonal cycles, as well as longer cycles, that influence the distribution of ice. However, these longer cycles might be more pronounced on Mars. This is because Mars’ tilt changes substantially — by as much as 60 degrees — on timescales of hundreds of thousands to millions of years. By comparison, the Earth’s tilt varies by only about 2 degrees over the same period. On Mars, this greater variability determines the amount of sunlight reaching a given spot on the surface and thus the stability of ice at all latitudes.

“Because the climate on Mars fluctuates with larger swings in axial tilt, and ice will distribute differently for each swing, Mars would look substantially different in the past than it does now,” said Smith. “Furthermore, because Mars has no oceans at present, it represents a simplified ‘laboratory’ for understanding climate science on Earth.”

Detailed measurements of ice thickness show that about 87,000 cubic kilometers of ice have accumulated at the poles since the end of the last ice age about 370,000 years ago; the majority of the material accumulated at the martian north pole. This volume is equivalent to a layer of 60 centimeters if spread uniformly across the surface. These results provide a means to understand the accumulation history of the polar deposits as related to Mars movements, such as orbital eccentricity, axial tilt, and rotation around the Sun. The results will support modeling efforts to understand the martian climate, looking at the movement of ice from poles to mid-latitudes during climate cycles.

“Studying ice on Mars also is important to the future of human exploration of the Red Planet,” said Smith. “Water will be a critical resource for a martian outpost.”

“An ice age recorded in the polar deposits of Mars” is published in Science. This work was funded by NASA’s Mars Reconnaissance Orbiter project. 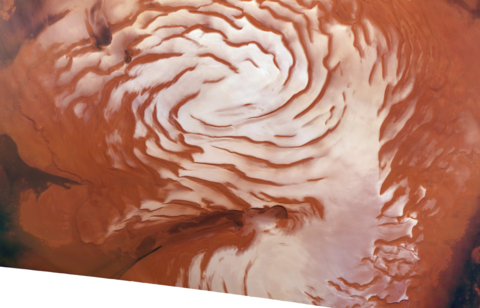 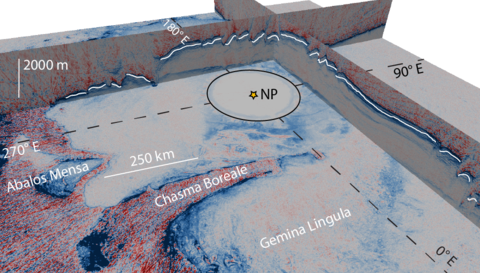