January 10, 2023 — In June 2021, NASA’s Juno spacecraft flew close to Ganymede, Jupiter’s largest moon, observing evidence of magnetic reconnection. A team led by Southwest Research Institute used Juno data to examine the electron and ion particles and magnetic fields as the magnetic field lines of Jupiter and Ganymede merged, snapped and reoriented, heating and accelerating the charged particles in the region.

“Ganymede is the only moon in our solar system with its own magnetic field,” said Juno Principal Investigator Dr. Scott Bolton of SwRI. “The snapping and reconnecting of Ganymede’s magnetic field lines with Jupiter’s creates the magnetospheric fireworks.”

Magnetic reconnection is an explosive physical process that converts stored magnetic energy into kinetic energy and heat. Ganymede’s mini magnetosphere interacts with Jupiter’s massive magnetosphere, in the magnetopause, the boundary between the two regions.

“We interpreted the presence of accelerated electrons traveling along the magnetic field at Ganymede’s magnetopause as evidence that magnetic reconnection was occurring there during the Juno flyby,” said Dr. Robert Ebert, lead author of a Geophysical Research Letters paper describing the findings. “These observations further support the notion that magnetic reconnection at Ganymede’s magnetopause can be a driver of dynamic processes in the local space environment around this moon of Jupiter.”

The SwRI-developed Jovian Auroral Distributions Experiment (JADE) aboard Juno observed enhanced electron fluxes, including accelerated, magnetic field-aligned electrons. Reconnection as observed by Juno is thought to be related to the generation of Ganymede’s aurora.

“The accelerated electrons observed by JADE are similar to those observed by NASA’s Magnetospheric Multiscale (MSS) spacecraft during reconnection at the Earth’s magnetopause,” said Dr. Stephen Fuselier, a co-author of the paper. “That’s one of the exciting results from the Ganymede flyby: Despite the vast differences between Ganymede and Earth, we find commonality in the universal process of magnetic reconnection.”

During the Juno flyby, the SwRI-led Ultraviolet Spectrograph (UVS) observed Ganymede’s auroral emissions, which are expected to be produced by electrons accelerated via magnetic reconnection. SwRI has built two additional UVS instruments to operate in Jupiter orbit aboard ESA’s JUpiter ICy moons Explorer (JUICE) spacecraft and NASA’s Europa Clipper. The European Space Agency’s JUICE mission is scheduled to launch in April 2023 and arrive at Jupiter in 2031. NASA’s Europa Clipper is scheduled to launch in October 2024 and arrive at Jupiter in 2030.

“Nothing is simple — or small — when you have the biggest planet in the solar system as your neighbor,” said Thomas Greathouse, a Juno scientist from SwRI. “This was the first measurement of this complicated interaction at Ganymede. This gives us a very early tantalizing taste of the information we expect to learn from ESA’s JUICE mission.”

A paper describing this research was published in Geophysical Research Letters and can be accessed at https://agupubs.onlinelibrary.wiley.com/doi/10.1029/2022GL099775. 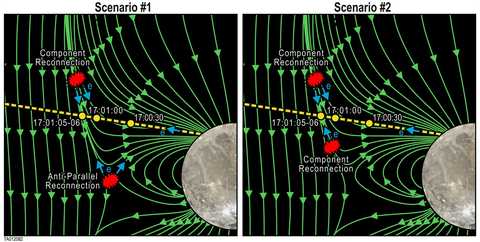