March 18, 2021 — Working with a team led by French astronomers, Southwest Research Institute scientists helped identify incredibly powerful winds in Jupiter’s middle atmosphere for the first time. The team measured molecules exhumed by the 1994 impact of comet Shoemaker–Levy 9 to trace winds in excess of 900 miles per hour near Jupiter’s poles.

Jupiter’s distinctive red and white bands of swirling clouds allow scientists to track winds in the planet’s lower atmosphere, and the SwRI team members have particular expertise in the vivid Jovian aurora, associated with strong winds in the gas giant’s upper atmosphere. Until now, wind patterns in the cloudless stratosphere, between the two atmospheric layers, have eluded observation.

“The team of astronomers led by Laboratoire d'Astrophysique de Bordeaux (LAB) in France had to get creative,” said SwRI’s Dr. Vincent Hue, co-author of an Astronomy & Astrophysics paper describing this research. “They followed fallout from that long-ago comet impact to track molecular evidence, specifically hydrogen cyanide, to measure stratospheric ‘jets’ — like Earth’s jet streams — on Jupiter.”

The Atacama Large Millimeter/submillimeter Array (ALMA) radio telescope facility allowed scientists to measure stratospheric winds in what they refer to as a unique meteorological beast in our solar system for the first time.

“The most spectacular result is the presence of strong jets, with speeds up to 400 meters per second (900 miles per hour), which are located under the auroras at the poles,” said LAB’s Thibault Cavalié, lead author of the paper.

“The stratospheric jets could behave like a giant vortex with a diameter  up to four times that of Earth,” said co-author Bilal Benmahi, also of LAB.

Using 42 of ALMA’s 66 high-precision antennas, the team measured the Doppler shift of hydrogen cyanide molecules — tiny changes in the frequency of radiation emitted by the molecules — caused by the winds in this region of the planet.

In addition to the surprising polar winds, the team also used ALMA to confirm the existence of strong stratospheric winds around the planet’s equator. The jets spotted in this part of the planet have average speeds of about 370 mph.

“These findings also set the stage for similar yet more extensive measurements to be made by the JUICE mission and its Submillimetre Wave Instrument,” said SwRI’s Dr. Thomas Greathouse, another co-author, referring to the European Space Agency’s JUpiter ICy moons Explorer. JUICE is expected to launch into space next year, carrying the next generation of SwRI’s Ultraviolet Spectrograph instrument.

ALMA is an international astronomy facility — managed by a partnership between the European Southern Observatory, the U.S. National Science Foundation and the National Institutes of Natural Sciences of Japan — in cooperation with the Republic of Chile where the array is located. 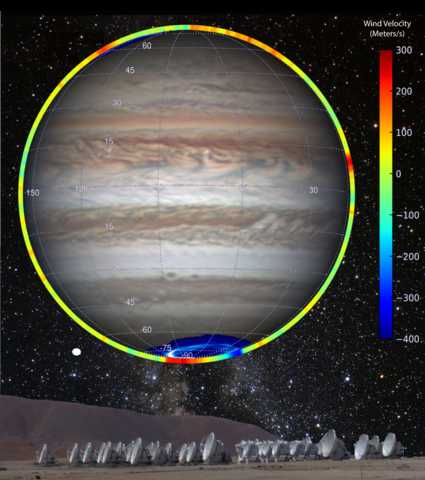 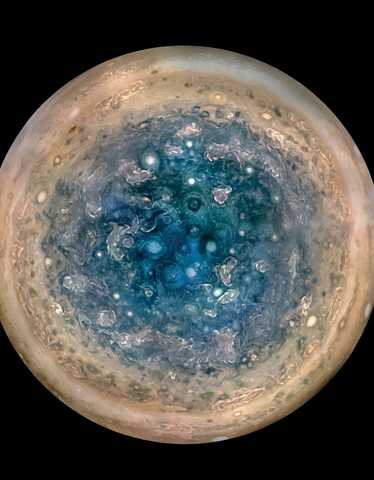