Boulder, Colo. — Dec. 9, 2013 — In the first 300 days of the Mars Science Laboratory surface mission, the Curiosity rover cruised around the planet’s Gale Crater, collecting soil samples and investigating rock structures while the onboard Radiation Assessment Detector made detailed measurements of the radiation environment on the surface of Mars.

“Our measurements provide crucial information for human missions to Mars,” said Dr. Don Hassler, a Southwest Research Institute program director and RAD principal investigator. Hassler is the lead author of “Mars’ Surface Radiation Environment Measured with the Mars Science Laboratory’s Curiosity Rover,” scheduled for publication in the journal Science online on December 9, 2013. “We’re continuing to monitor the radiation environment, and seeing the effects of major solar storms on the surface and at different times in the solar cycle will give additional important data. Our measurements also tie into Curiosity’s investigations about habitability. The radiation sources that are of concern for human health also affect microbial survival as well as the preservation of organic chemicals.”

Two forms of radiation pose potential health risks to astronauts: a chronic low dose of galactic cosmic rays (GCRs) and the possibility of short-term exposures to the solar energetic particles (SEPs) associated with solar flares and coronal mass ejections. The radiation on Mars is much harsher than on Earth for two reasons: Mars lacks a global magnetic field and the Martian atmosphere is much thinner than Earth’s, providing little shielding to the surface.

This environmental factor poses a challenge for future human exploration of Mars and is also important in understanding both geological and potential biological evolution on Mars. Both GCRs and SEPs interact with the atmosphere and, if energetic enough, penetrate into the Martian soil, or regolith, where they produce secondary particles that contribute to the complex radiation environment on the Martian surface, which is unlike anything on Earth.

According to RAD data, most mission radiation exposure will be during outbound and return travel, when the astronauts will be exposed to the radiation environment in interplanetary space, shielded only by the spacecraft itself. The total during just the transit phases of a Mars mission would be approximately 0.66 Sv for a round trip with current propulsion systems and during similar solar activity. A 500-day mission on the surface would bring the total exposure to around 1 Sv.

Long-term population studies have shown that exposure to radiation increases a person’s lifetime cancer risk; exposure to a dose of 1 Sv is associated with a five percent increase in fatal cancer risk. Although NASA has generally established a three percent increased risk of fatal cancer as an acceptable career limit for astronauts in low earth orbit, it does not currently have a limit for deep space missions, and is working with the National Academies Institute of Medicine to determine appropriate limits for deep space missions, such as a mission to Mars in the 2030s. 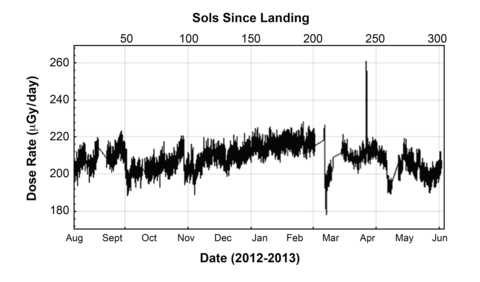 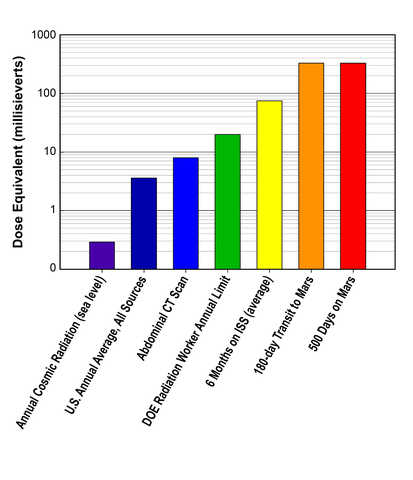