Boulder, CO — Aug.19, 2015 — Researchers at Southwest Research Institute (SwRI) and Queen’s University in Canada have unraveled the mystery of how Jupiter and Saturn likely formed. This discovery, which changes our view of how all planets might have formed, will be published in the Aug. 20 issue of Nature.

Ironically, the largest planets in the solar system likely formed first. Jupiter and Saturn, which are mostly hydrogen and helium, presumably accumulated their gasses before the solar nebula dispersed. Observations of young star systems show that the gas disks that form planets usually have lifetimes of only 1 to 10 million years, which means the gas giant planets in our solar system probably formed within this time frame. In contrast, the Earth probably took at least 30 million years to form, and may have taken as long as 100 million years. So how could Jupiter and Saturn have formed so quickly?

The most widely accepted theory for gas giant formation is the so-called core accretion model. In this model, a planet-sized core of ice and rock forms first. Then, an inflow of interstellar gas and dust attaches itself to the growing planet. However, this model has an Achilles heel; specifically, the very first step in the process. To accumulate a massive atmosphere requires a solid core roughly 10 times the mass of Earth. Yet these large objects, which are akin to Uranus and Neptune, had to have formed in only a few million years.

In the standard model of planet formation, rocky cores grow as similarly sized objects accumulate and assimilate through a process called accretion. Rocks incorporate other rocks, creating mountains; then mountains merge with other mountains, leading to city-sized objects, and so on. However, this model is unable to produce planetary cores large enough, in a short enough period of time, to explain Saturn and Jupiter.

“The timescale problem has been sticking in our throats for some time,” said Dr. Hal Levison, an Institute scientist in the SwRI Planetary Science Directorate and lead author of the paper. Titled “Growing the Gas Giant Planets by the Gradual Accumulation of Pebbles,” the paper is co-authored by SwRI Research Scientist Dr. Katherine Kretke and Dr. Martin Duncan, a professor at Queen’s University in Kingston, Ontario.

“It wasn’t clear how objects like Jupiter and Saturn could exist at all,” continued Levison. New calculations by the team show that the cores of Jupiter and Saturn could form well within the 10-million-year time frame if they grew by gradually accumulating a population of planetary pebbles – icy objects about a foot in diameter. Recent research has shown that gas can play a vital role in increasing the efficiency of accretion. So pebbles entering orbit can spiral onto the protoplanet and assimilate, assisted by a gaseous headwind.

In their article, Levison, Kretke, and Duncan show that pebble accretion can produce the observed structure of the solar system as long as the pebbles formed slowly enough that the growing planets have time to gravitationally interact with one another.

“If the pebbles form too quickly, pebble accretion would lead to the formation of hundreds of icy Earths,” said Kretke. “The growing cores need some time to fling their competitors away from the pebbles, effectively starving them. This is why only a couple of gas giants formed.”

“As far as I know, this is the first model to reproduce the structure of the outer solar system, with two gas giants, two ice giants (Uranus and Neptune), and a pristine Kuiper belt,” says Levison.

“After many years of performing computer simulations of the standard model without success, it is a relief to find a new model that is so successful,” adds Duncan.

Levison is the principal investigator of the research, funded through a National Science Foundation Astronomy and Astrophysics Research Grant. 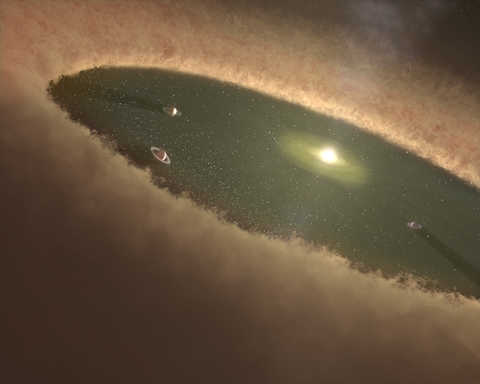