July 27, 2021 — The impactor believed to have wiped out the dinosaurs and other life forms on Earth some 66 million years ago likely came from the outer half of the main asteroid belt, a region previously thought to produce few impactors. Researchers from Southwest Research Institute have shown that the processes that deliver large asteroids to Earth from that region occur at least 10 times more frequently than previously thought and that the composition of these bodies match what we know of the dinosaur-killing impactor.

The SwRI team — including Dr. David Nesvorný, Dr. William Bottke and Dr. Simone Marchi — combined computer models of asteroid evolution with observations of known asteroids to investigate the frequency of so-called Chicxulub events. Over 66 million years ago, a body estimated to be 6 miles across hit in what is now Mexico’s Yucatan peninsula and formed Chicxulub crater, which is over 90 miles across. This massive blast triggered a mass extinction event that ended the reign of the dinosaurs. Over the last several decades, much has been learned about the Chicxulub event, but every advance has led to new questions.

“Two critical ones still unanswered are: ‘What was the source of the impactor?’ and ‘How often did such impact events occur on Earth in the past?’” Bottke said.

To probe the Chicxulub impact, geologists have previously examined 66-million-year-old rock samples found on land and within drill cores. The results indicate the impactor was similar to the carbonaceous chondrite class of meteorites, some of the most pristine materials in the solar system. Curiously, while carbonaceous chondrites are common among the many mile-wide bodies that approach the Earth, none today are close to the sizes needed to produce the Chicxulub impact with any kind of reasonable probability.

“We decided to look for where the siblings of the Chicxulub impactor might be hiding,” said Nesvorný, lead author of a paper describing the research.

“To explain their absence, several past groups have simulated large asteroid and comet breakups in the inner solar system, looking at surges of impacts on Earth with the largest one producing Chicxulub crater,” said Bottke, one of the paper’s co-authors. “While many of these models had interesting properties, none provided a satisfying match to what we know about asteroids and comets. It seemed like we were still missing something important.”

To solve this problem, the team used computer models that track how objects escape the main asteroid belt, a zone of small bodies located between the orbits of Mars and Jupiter. Over eons, thermal forces allow these objects to drift into dynamical “escape hatches” where the gravitational kicks of the planets can push them into orbits nearing Earth. Using NASA’s Pleaides Supercomputer, the team followed 130,000 model asteroids evolving in this slow, steady manner for hundreds of millions of years. Particular attention was given to asteroids located in the outer half of the asteroid belt, the part that is furthest from the Sun. To their surprise, they found that 6-mile-wide asteroids from this region strike the Earth at least 10 times more often than previously calculated.

“This result is intriguing not only because the outer half of the asteroid belt is home to large numbers of carbonaceous chondrite impactors, but also because the team’s simulations can, for the first time, reproduce the orbits of large asteroids on the verge of approaching Earth,” said co-author Marchi. “Our explanation for the source of the Chicxulub impactor fits in beautifully with what we already know about how asteroids evolve.”

Overall, the team found that 6-mile-wide asteroids hit the Earth once every 250 million years on average, a timescale that yields reasonable odds that the Chicxulub crater occurred 66 million years ago. Moreover, nearly half of impacts were from carbonaceous chondrites, a good match with what is known about the Chicxulub impactor.

“This work will help us better understand the nature of the Chicxulub impact, while also telling us where other large impactors from Earth’s deep past might have originated,” Nesvorný said.

The journal Icarus is publishing a paper about this research, “Dark Primitive Asteroids Account for a Large Share of K/Pg-Scale Impacts on the Earth” (Volume 368, 1 November 2021, 114621, Elsevier publications). 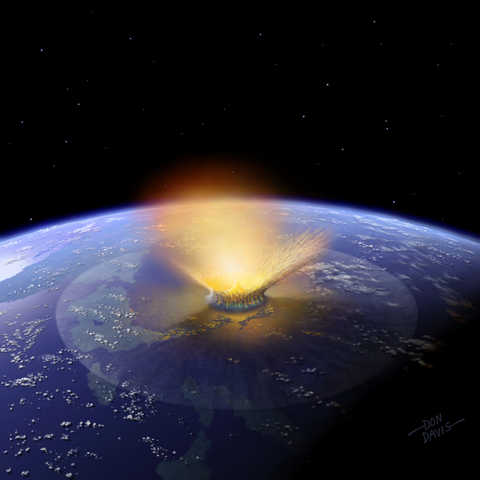