Institute Engineer Dr. Charles Roberts, Assistant Director Dr. Terry Alger and Research Technologist Barrett Mangold, all of SwRI’s Engine, Emissions and Vehicle Research Division, received the award at the SAE World Congress in Detroit in April. Former SwRI employee Jess Gingrich is also a co-recipient. Their paper, “The Interaction of Fuel Anti-Knock Index and Cooled EGR on Engine Performance and Efficiency,” looked at different octane-rated gasolines and different EGR levels to examine the benefit of EGR on octane levels. Tests outlined in the paper also allowed the authors to compare the dilution impacts of EGR and fuel dilution on knock.

The award, established in 1938, recognizes the authors of the best paper regarding the better mutual adaptation of fuels and internal combustion engines. It is given in the memory of Harry L. Horning, president of SAE in 1925.

Roberts joined SwRI in 1997. He manages and conducts research and development for SwRI’s Clean High-Efficiency Diesel Engine (CHEDE-VI) consortium, one of the world’s longest-running diesel engine research programs. He holds 20 patents in engine and emissions technology and is an original patent holder and former manager of the SwRI High-Efficiency Dilute Gasoline Engine (HEDGE®) consortium.

Alger joined SwRI in 2003. He is the manager of SwRI’s HEDGE III consortium, which is focused on improving gasoline engine efficiency through the use of cooled EGR, advanced ignition systems and other efficiency-enhancing technologies. He has been awarded 11 patents. He previously was a recipient of SAE’s McFarland Award for being “instrumental in establishing a forum through SAE to foster improved discussions on high-efficiency internal combustion engine technologies.”

Roberts and Alger are both Fellows of the Society of Automotive Engineers, the highest grade of membership in the SAE, given to long-term members who have made a significant impact on the society’s mobility technology through leadership, research and innovation.

Mangold, who joined SwRI in 2003 has designed, fabricated and operated a broad range of test experiments related to engine and vehicle research. He has authored numerous articles. 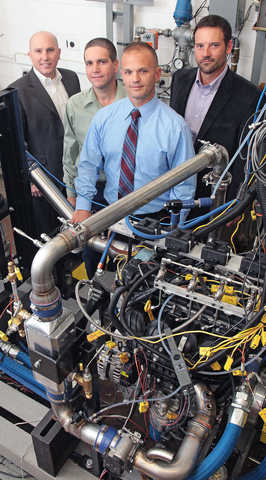