San Antonio — July 24, 2014 — A mobile population and a fast-changing business climate mean that a lifetime of work nowadays encompasses multiple jobs, often in a number of cities.

Last year, the employee tenure at the Fortune 500 company with the highest turnover was just over nine months, according to a recently published Payscale report. Even among several other highly admired Fortune 500 corporations cited in the survey, employees only stick around for one year, on average, before moving on.

Both Hal King and John Bonewald were honored for 50 years of service at a recent employee recognition program. It was the first time in its 67-year history that the Institute had recognized such a lengthy term of employment, let alone two at once.

Long tenures aren’t all that unusual among SwRI’s 2,800 employees; President J. Dan Bates, who has announced he will retire in September, was among three employees recognized recently for 45 years at the Institute. There were six 40-year awards, and a whopping 17 were honored for 35 years of service at the ceremony, one of two held each year. Another 50-year employee is expected to be recognized at the December semi-annual service ceremony.

When Bonewald applied for a job at the Institute in 1964, he didn’t have to go far.

“I was born and raised just across the road,” he said. Culebra Road in those days was mostly farm country, and he grew up plowing the fields on the dairy farm where he was born. “I didn’t know much about the Institute other than that they had an agricultural department,” he recalled.

Bonewald had a mechanical as well as a farming background, and while between jobs, he met several employees in SwRI’s automotive laboratory who encouraged him to apply.

“I was hired, and the rest is history,” he said. After starting as an engine operator and technician, Bonewald today is assistant director of laboratory operations for SwRI’s Fuels and Lubricants Research Division. “SwRI is home away from home; the people here are like family.” He added, “SwRI has given me the chance to broaden my skills and learn from the best.”

“While I was going to Jefferson High School, I had a friend whose father was an engineer here at the Institute. He told me many stories of projects that he was associated with, and from then on I was hooked. I wanted to work for Southwest Research Institute.”

After his discharge from the U.S. Air Force, King contacted the engineer, who set up an interview. “I feel that I’ve been afforded the opportunity of a lifetime, to learn and to interact with such an innovative and progressive group of people,” he said.

“I guess I never really thought about 50 years as a goal. I just totally enjoy what I’m doing.” All in all, King said, “I’m proud of my career and honored to be associated with SwRI. I can honestly say that time passes quickly when you love what you’re doing.” 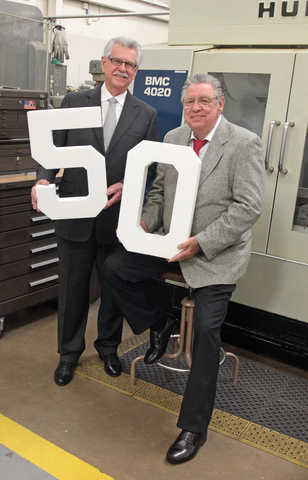