September 23, 2008 - Surprising data from the Ulysses spacecraft show that the solar wind - the continuous outflow of plasma and magnetic fields from the Sun's atmosphere (corona) into interplanetary space - is only about three fourths as strong as it was a decade ago, during the last interval of low solar activity. Since its launch in 1990, Ulysses has completed nearly three polar orbits around the Sun, enabling researchers to observe the three-dimensional structure of the solar wind and heliosphere, or region of space dominated by our Sun, for the first time.

"This pioneering spacecraft has allowed us to discover new and fascinating things about the Sun's million-mile-per-hour solar wind and how it changes over time," says Dr. David J. McComas, principal investigator of the Solar Wind Observations Over the Poles of the Sun (SWOOPS) experiment onboard Ulysses and senior executive director of the Space Science and Engineering Division at Southwest Research Institute® (SwRI®). "To see such a significant and consistent long-term reduction in the solar wind output is really remarkable."

Over its 18 years in orbit about the Sun, Ulysses has observed the solar wind at both the minimum and maximum phases of the solar activity (or sunspot) cycle. During solar minimum, the wind is well ordered, with a fast, steady wind over the poles and a slow variable wind at lower latitudes; at solar maximum, the solar wind is highly chaotic, with fast and slow wind streams and more frequent coronal mass ejections at all solar latitudes.

Now, three-quarters of the way through its third orbit, Ulysses is again observing a solar wind structure characteristic of low levels of solar activity. "During the third orbit, we weren't surprised to see a return to a solar minimum configuration," says McComas, "but we were surprised to find that the solar wind is much less powerful than it had been in the previous solar minimum. The wind speed is almost the same, but the density and pressure are significantly lower, and the wind is blowing out about a quarter less hard."

To determine whether the weaker solar wind is a whole-sun phenomenon, the team compared Ulysses' high-latitude observations with measurements made by the Advanced Composition Explorer spacecraft at low solar latitudes. The data show a close correlation in the dynamic pressure of the wind measured at all latitudes, confirming that the unusually weak outflow is a global phenomenon.

The effects of the weaker wind will be felt several billion miles beyond the orbit of Pluto, at the farthest limits of the Sun's influence. "The heliosphere is a big bubble that's inflated from the inside by the million-mile-per-hour solar wind blowing out in all directions," says McComas. "The size of the bubble is determined by the balance of pressure of the solar wind pushing from the inside out and the pressure of interstellar space pushing from the outside in. If the solar wind is blowing out a quarter less hard, that means the outer boundaries of the heliosphere must be shrinking. The entire heliosphere must be getting smaller."

Future NASA missions will help resolve some of the intriguing questions brought forth by Ulysses. NASA is scheduled to launch the Interstellar Boundary Explorer (IBEX) spacecraft in October to make the first global images of the outer boundaries of the solar system. IBEX will be able to image interactions in that region caused by a weaker solar wind. In addition, NASA is about to begin development of the Solar Probe mission to fly in close to the Sun and determine what heats its corona and accelerates the solar wind.

Ulysses is a joint venture of NASA and the European Space Agency. ESA provided the spacecraft and NASA provided the launch vehicle and upper stage boosters. An international team of investigators designed and built the science payload. For more information about Ulysses, visit: http://sci.esa.int/ulysses.

Editors: Note that the SwRI press release distributed September 23, 2008, inadvertently failed to credit the European Space Agency as a full partner with NASA in this mission. We sincerely apologize for the oversight and any inconvenience this error caused. Please ensure that ESA is properly credited in articles about Ulysses' pioneering mission. 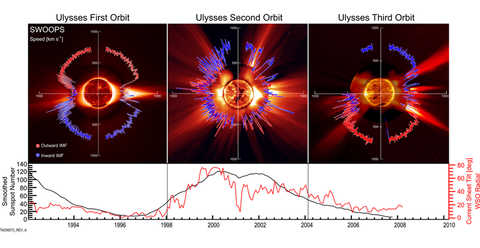