These colloquial nicknames describe the crude pulled from the ground and refined into a range of products, including the fuels that power our cars and the asphalt we drive on. About 1% of each barrel of crude oil is turned into base stocks for lubricants, such as engine oil.

For engine oils, the adage that’s been passed down for generations is change it every three months or 3,000 miles. However, today’s modern vehicles are designed to use vastly different modern fluids. For instance, vehicle manufacturers are now working with additive companies to develop fluids designed to last 20,000 miles in a typical passenger car and up to 75,000 miles in heavy-duty trucks.

Today, using a fluid designed for one engine can have devastating effects on another. Getting top performance and durability out of your vehicle requires using the best oils specifically designed for your application.

Rebecca and Robert Warden are a husband-wife mechanical engineering duo who joined SwRI in 2009 after meeting at Rose-Hulman Institute of Technology in Terre Haute, Indiana. Ms. Warden manages the fleet and driveline fluid evaluation section, while Mr. Warden manages the diesel lubricants group, both in the Fuels and Lubricants Research Division.

Since 1949, a significant portion of Southwest Research Institute’s 1,200 acres has been dedicated to assessing vehicles and the fluids they need to run efficiently. We operate hundreds of automotive test stands 24 hours a day, seven days a week, 365 days a year, looking at every component on a vehicle, from headlights to tailpipes. Many of those test stands are assessing the lubricants that ensure your vehicle runs smoothly (see infographic). SwRI not only conducts regular testing of these fluids, but also helps develop the specifications and tests used to evaluate new products before they enter the marketplace.

Today, many engine oils are 70 to 80% base stocks, ranging from minimally refined petroleum products, which can be found in conventional oils, to advanced base stocks found in synthetic products. Additive components make up the remaining 20 to 30% and play a vital role in a lubricant’s performance.

So, what do all these additives do? These chemical components are mixed with an oil base stock to enhance its properties, including lubricity, viscosity, detergency and extreme pressure properties. 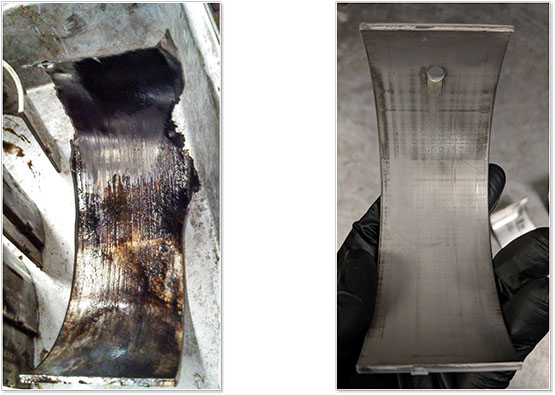 These two bearings illustrate the performance difference between previous generations of oil and today’s products. Taken from the same modern heavy-duty diesel engine test, the image on the left shows results from an oil that was considered strong-performing in 2006. The image on the right shows the superior protection provided by a standard performance, lower viscosity oil available today.

For example, for a multi-weight oil such as 0W-30 or 10W-30, the first number correlates with an oil’s low-temperature performance, which is important at start-up and in cooler climates. A 5W-30 and a 10W-30 oil may use the same base stock but have different additives to modify its low-temperature properties, such as viscosity. Think of honey and water. Cold water pours easily while cold honey is quite thick, or viscous. Heat them both in a microwave and the honey thins out and flows easily, while the water pours about the same. Viscosity-modifier additives help the oil flow well when an engine is cold and keep it from thinning out too much once it warms up.

Viscosity is the quality of being viscous, a consistency that resists flow. Water has a small but measurable viscosity, or “stickiness,” associated with the weak mutual attraction of water molecules.

Automatic transmission fluid is one of the most complex oils in a vehicle. ATF wears many hats. It protects gears and pumps from damage, wear and corrosion and acts like a hydraulic fluid to control clutches used to shift gears. ATF plays a major role in how the transmission shifts feel to the driver.

Many of these requirements are contradictory. For example: to protect gears, oil should be slippery to let gears slide off each other and minimize wear. Conversely, clutch performance requires oil to be sticky to hold the clutch plates together and prevent the transmission from slipping. Finding the right balance of additives can be critical to performance and durability.

To make things more difficult, many ATFs are now “fill-for-life” fluids, meaning the fluid must be able to hold up for over 100,000 miles and many, many years of service.

Engine oil performs many of the same functions as transmission oil but has the added requirement of absorbing and neutralizing combustion products. The byproducts from burning fuel are often acidic or abrasive and can damage an engine. The oil must capture them and neutralize their effects while maintaining its other characteristics.

While every intention of original equipment manufacturers (OEMs) is to go to market with the best products, field issues have been known to happen that can be remedied with a fluid adjustment. In many cases, tests will be developed to replicate the issue in a controlled environment. SwRI works with OEMs and additive companies to develop these tests and enable lubricant formulators to fix problems with fluid adjustments.

Once developed, these test procedures often become standardized and required by OEMs, the automotive industry and the military to ensure that all future lubricant blends, batches or formulations don’t cause the same problems in today’s vehicles. 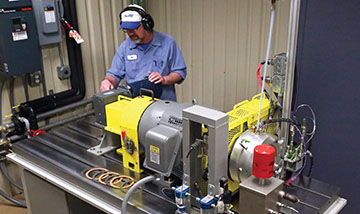 For example, one of the oldest tests is L-33-1, a gear oil rust test developed in the early days of World War II. At that time, axle lubricants were allowing components to rust, resulting in an unacceptable number of axle failures. The L-33-1 test simulates the field conditions and evaluates lubricants’ ability to protect the axle from corroding. While it hasn’t changed much in the decades since WWII, it is still required for all axle fluids today.

A hydraulic fluid is an oil- or water-based medium that transfers power in compression-based hydraulic machinery. While the primary function is to convey power, hydraulic fluids also protect machine components and provide other benefits including enhancing pump efficiency and the functional life of materials.

A more modern example is low-speed pre-ignition (LSPI). This phenomenon occurs in modern direct-injection engine designs. As OEMs have shrunk engine sizes to reduce emissions, they’ve turned to turbocharging to maintain power. This combination can cause combustion to start at unintended times with potentially devastating consequences for the engine.

To develop a new test, you must first identify a problem, such as LSPI, and design techniques to recreate it. Some test developers take this a step further, such as for gear wear tests. Some tests use gears deliberately designed for poor performance to amplify the problems and allow for better differentiation of fluids.

Some wear parameters are determined by length of time and load. Running an engine really hard for a long time will wear parts out. Others are amplified by certain operating conditions. Gear scoring is associated with transient or varying loads or impacts. Scoring is also affected by how well gears have been “broken in.” Finding the right combination of surface prep and impact load to produce gear scoring is critical in developing a gear scoring test.

Once a test is developed, designers must prove that it can be consistently replicated on multiple stands in various labs around the world. Control systems are also critical to ensuring repeatability in tests.

Controlling test hardware is just as critical as controlling test conditions. At any given time, we stock thousands of components to ensure that hardware is exactly the same, test after test. This protects us from inevitable “no-change changes” that can occur in production parts. The name for these phenomena comes from relatively minor changes that likely don’t affect vehicle performance but have a critical impact on a highly controlled test. They can send the industry into a tailspin when something as simple as changing a filter supplier skews oil wear test results. 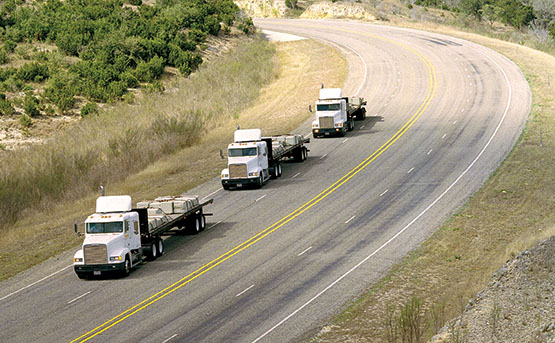 SwRI conducts fuel economy testing in the Texas Hill Country for Class 8 tractor trailer rigs. Different oils can make minor improvements in efficiency that translate into major savings across the thousands of miles large fleets travel in a year. 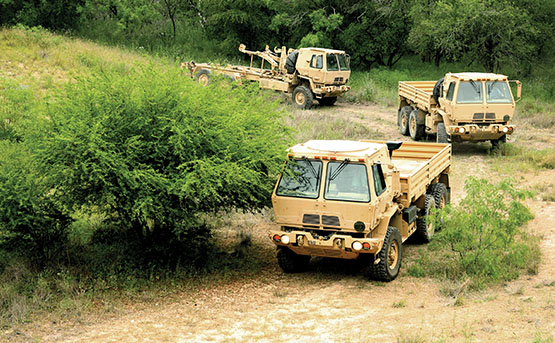 SwRI conducted fuel consumption testing on U.S. Army trucks in the field to evaluate how high-efficiency fluids could improve fuel economy fleetwide. Small improvements in fuel economy can save lives in the battlefield by reducing fuel resupply missions.

The goal for standardized testing is to certify a product meets performance for the intended application. This “stamp of approval” means an oil has undergone required tests and performed within various limits set by the industry or OEMs.

After evaluation and approval, oils make their way to store shelves, packaged in brightly colored containers to catch the eye. But what is most important is a small area on the back that shows a product’s qualifications. If what’s listed there doesn’t match or exceed what’s in your owner’s manual, it’s probably not the right product to use in your vehicle.

Factory fill refers to fluids that are added to new vehicles about to hit the market. This is the ultimate designation for an oil, because not only does it involve vast volumes of the fluids sold to an OEM, but a consumer often will stick with that brand of oil throughout the lifespan of their vehicle.

After standardized testing, you end up with a list of products that meet the manufacturer’s expected durability. But if you’re an oil marketer, how do you ensure your product is the one chosen for use? One differentiator is to prove a fuel economy benefit, which can result in a lucrative factory fill or fleet contract. To illustrate this, long-haul trucks travel an average of 70,000 miles per year getting around six miles per gallon of fuel. Increasing fuel economy by 2% can save almost 250 gallons of fuel per year. For a fleet of 8,000 semis at fuel prices of $3 per gallon, that 2% fuel economy benefit saves over $6 million in fuel costs each year.

While commercial companies operate large fleets of trucks, the world’s largest owner of vehicles is the U.S. military. Recently the Army studied how using the most efficient fluids in all components of its transport fleet could affect fuel economy. As it turns out, just changing the oil products resulted in a staggering 7.8% improvement in fuel economy.

The U.S. Army has studied the costs of fuel and water resupply missions in Afghanistan and Iraq, not only in dollars, but also in lives. Casualties calculated include soldiers and civilians killed or wounded while transporting fuel to consuming units. The casualty factor for fuel resupplies in Afghanistan is 0.042 or almost one casualty for every 24 fuel resupply convoys.

In addition, a mere 1% increase in fuel efficiency means 6,444 fewer refueling trips for soldiers. For the military, saving fuel is about more than saving money, it’s about protecting lives.

Keeping your car running like a well-oiled machine often depends on the oil. SwRI has been evaluating how well lubricants work for almost 70 years, because a good oil can protect your vehicle and help it run for years, while the wrong one can stop it dead in its tire tracks. Plus, in military applications, the right oil can literally save lives.