SwRI has developed and illustrated the use of an approach to model the mechanical performance of a concrete bridge and its structural components exposed to fire and subject to spalling. The work is motivated by recent fire incidents that involved concrete bridges (Figure 1), the poor state of an increasing number of bridges throughout the United States (which makes them more vulnerable to fire damage), and the lack of design codes and standards that adequately protect bridges against fire. Concrete is a porous material consisting of solid, liquid and gaseous phase components. When concrete is exposed to elevated temperatures from fire, in addition to deterioration of strength and stiffness of the structural material under intense heat, the multiphase process involving thermal, mechanical, and liquid and vapor flow inside concrete results in spalling. This reduces the thickness of structural members and exposes the reinforcing rebars or prestressing tendons, resulting in the rapid loss of design capacity of the structure.

Figure 1: Recent fire incidents involving concrete bridges led to the development of a model to assess the mechanical performance of concrete bridges and the structural components exposed to fire and spalling.

The objective of this work was to develop a method to predict spalling that captures the principal physical and chemical phenomena yet is simple enough that it can be implemented in a 3D simulation for predicting the performance of structures exposed to fire. The first step in the approach involved using a hydrothermal model to determine if and at what temperature spalling occurs for a specified concrete mix (defined by its composition, type of aggregate, water‐cement ratio, porosity, permeability, etc.), free moisture content and heating rate. The second step uses the resulting “critical spalling temperature” in a coupled thermal and mechanical analysis to determine how spalling affects the performance of the concrete member.

The fire response of post-tensioned, prestressed concrete structural slab systems (Figure 2) was studied, considering the effects of non-spalling and spalling of concrete under standard fire conditions. A comprehensive one-dimensional (1D) heat and mass transfer model was developed to predict spalling depth versus time of concrete exposed to fire (Figure 3). The model can be used to estimate the spalling depth for various characteristics of the concrete (e.g., composition, type of aggregate, water cement ratio, porosity, permeability, free moisture content, and heating rate). The 3D finite element model of the nonlinear structural system consists of a concrete slab, unbonded tendon and the end anchors, and was used to validate the experimental results with the non-spalling concrete available in the literature. The validated model was then used to effectively study the thermal and structural responses of the slab system (Figure 4) and to consider the effects of concrete spalling using the simplified spalling criterion. 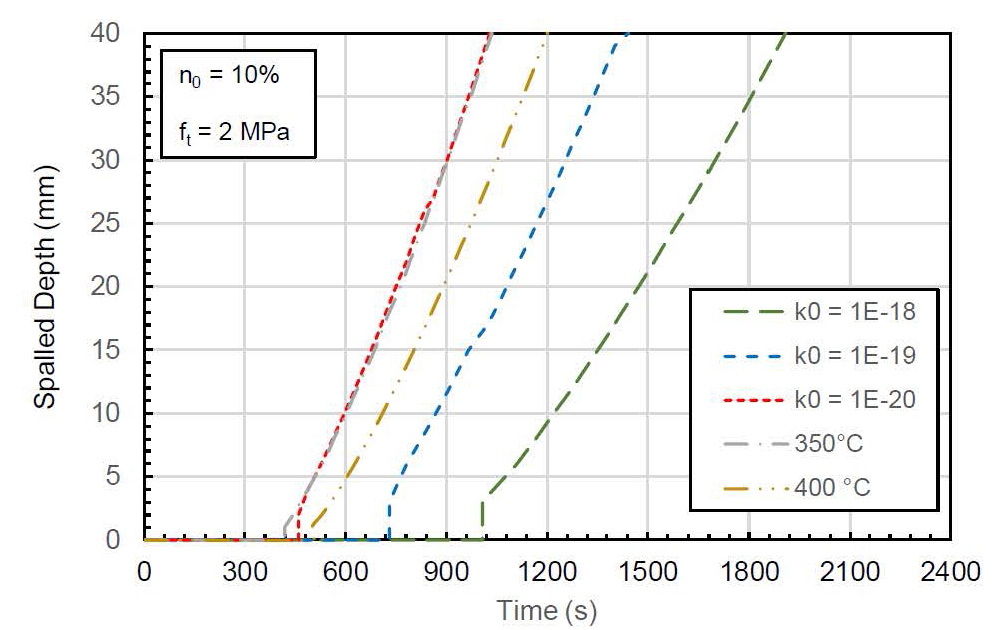