Lightning and the thunder that accompanies it are among the most spectacular yet familiar visual and auditory displays in nature. Describing a thunderstorm’s terrifying booms, blinding flashes, and deadly electrical discharges invites superlatives, and not without reason. Lightning strikes the Earth millions of times each day, all over the world.

In the U.S. alone, it kills about 100 people each year and injures 1,000 more. It can cause power outages, fires, and plane crashes, amounting to tens of millions of dollars in damages annually. It even happens in space. Lightning has been observed on Jupiter, Venus, Saturn, and Titan. For a multitude of reasons, it’s important for an increasingly technology-driven world to understand exactly what makes lightning happen — and where, and when.

ABOUT THE AUTHOR
Maher A. Dayeh, Ph.D., is a senior research scientist in the Space Science and Engineering Division. He has more than 12 years of research experience spanning a range of topics including solar, heliospheric, magnetospheric, and planetary science, as well as the design and development of atmospheric and space instrumentation. He also has studied the physics of lightning. 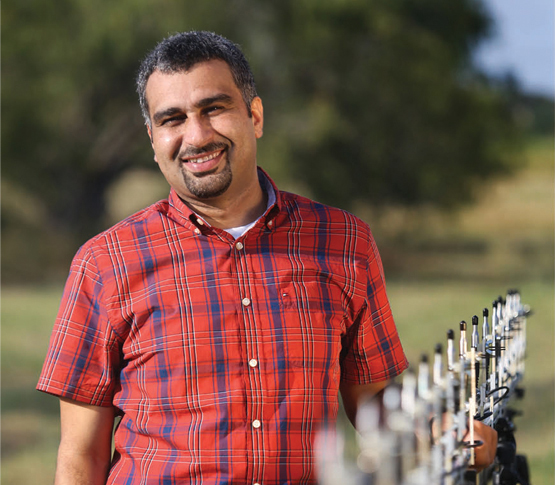 For all the dazzle and danger of a thunderstorm, lightning and thunder remain poorly understood by scientists. Notwithstanding Benjamin Franklin’s legendary (and lucky) kite-flying experiment, studying lightning in nature is complicated and dangerous. Also, because individual lightning strikes are unpredictable, it is impractical to build an instrument array big and close enough to observe and measure the exact conditions that trigger lightning in a cloud, or the path by which it propagates through the air.

In the past two decades, advances in instrumentation and remote sensing — and, importantly, the ability to artificially trigger lightning — have significantly enhanced scientific understanding of lightning physics. Scientists now know lightning is associated with high-energy processes that span vast scales and can be observed in different forms, including X-ray emissions on the ground, sprites and jets above thunderclouds in the upper atmosphere, and terrestrial gamma ray flashes observed by satellites from space as well as by instruments on the ground. 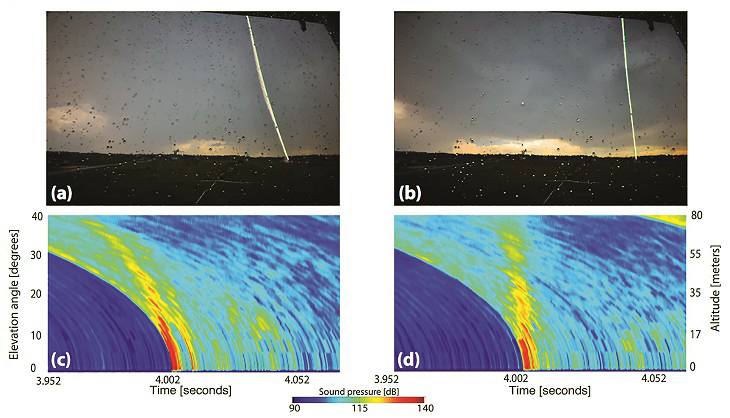 X-ray emissions on the ground, sprites and jets above thunderclouds in the upper atmosphere, and terrestrial gamma ray flashes observed by satellites from space as well as by instruments on the ground.

Despite those advances, examining the physics of lightning via its acoustic signature (i.e., thunder) has been limited in part because of the old adage that lighting never strikes the same place twice. While the adage is not scientifically accurate, the random nature of lightning strikes means that thunder typically must be measured from a distance. Sound is slow compared to light, so by the time an acoustic signature reaches the instrument, the lightning bolt that caused it is long gone. Also, the measured signals will have been altered by numerous propagation and atmospheric effects. Nevertheless, a team of scientists and engineers from Southwest Research Institute (SwRI) decided to take a closer look at thunder in an attempt to understand its origin and what it discloses about the lightning process.

Lightning is a transient, high-current electric discharge. Its path is random, with the length of the path often measured in miles (or kilometers). Lightning usually occurs in dynamic atmospheric environments where electric charges produce fields strong enough to turn the surrounding air into a conductor. Scientists classify lightning strikes by how they propagate. The most common forms are ground-to-cloud, cloud-to-cloud, intracloud, and cloud-to-ground discharges.

Cloud-to-ground is the best understood form of lightning. These bolts start as a complex brew of electrostatic charges churning in storm clouds. Under prevailing conditions, these charges trigger “stepped leaders,” or veins of electricity branching downward. After a series of successive spurts, electrons pool at their tips and trigger new leaders in a branching pattern. These stepped leaders propagate downward in a discontinuous fashion with immensely intense electric fields at their tips. Meanwhile, tall objects on the ground, such as trees or houses, can send streams of positively charged channels upward. With several stepped leaders propagating down and somewhat fewer of these streamers reaching up, a pair eventually meet. The resulting attachment process opens a discharge channel. An initial bolt travels down the path, exciting almost instantaneous return strokes that follow. This flickering flash is lightning as we know it. 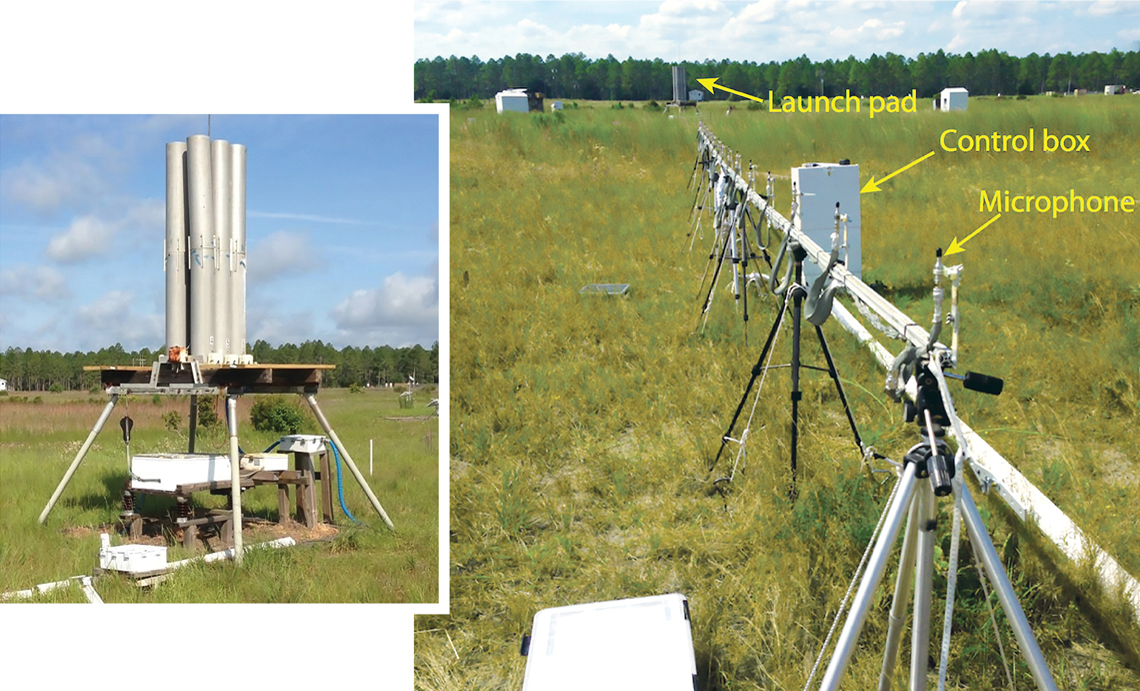 (Left) Scientists shot a wire-grounded model rocket from this launch pad into thunderclouds to trigger artificial lightning. (Right) During the experiment in Florida, the array extended away from the launch pad used to trigger lightning.

Thunder happens when lightning suddenly heats the air to temperatures as high as 30,000 degrees Kelvin — five times hotter than the surface of the Sun. This sudden spike of temperature and pressure causes the surrounding air to expand rapidly outward, then collapse inward as it cools, creating a shock wave. Early in a return stroke, the pressure inside the channel is several times the atmospheric pressure. In a few tens of microseconds, the shock wave expands outward a few meters and then decays into a sound wave. The way we hear thunder largely depends on how far we are from the lightning bolt. If we are nearby, thunder sounds sharp and loud, like claps and cracks. From farther away, the sound has lost most of its high-frequency components and we only hear the longer-lasting, low-frequency rumbles. Thunder audibility is also influenced by echoes created by terrain and atmospheric effects such as humidity, wind velocity, or temperature inversions.

To date, lightning studies using acoustic signatures have focused mostly on the thunder sound spectrum’s infrasound portion — less than 20 Hz, not audible to humans. Previous audible thunder research used spatially distributed microphones to map the sound sources, using triangulation and signal processing to “reconstruct” the shape of the lightning channel. This research was useful, particularly for bolts within clouds that cannot be seen, but the microphones’ distance from the channel severely limited the measurements.

This schematic illustrates the initiation, propagation, and attachment processes that open a conductive channel or path for the primary stroke in a cloud-to-ground lightning strike. The lightning bolt often has several return strokes, which usually follow the path of the first one.

The high-frequency components of thunder dissipate rapidly. To get the full acoustic picture and capture a complete image of thunder, instruments must be very close to the lightning strike. To make this close-up picture, the SwRI team collaborated with scientists at the International Center for Lightning Research and Testing (ICLRT) at Camp Blanding, Florida. Operated by the University of Florida and the Florida Institute of Technology, this world-renowned lightning research center specializes in producing “artificial lightning.” Taking advantage of Florida’s claim of receiving the most lightning strikes per year in the U.S., ICLRT offers large outdoor facilities equipped with sensors, imagers, and instrumentation. To trigger lightning, a small model rocket trailing a grounded copper wire is launched into a thundercloud during favorable electrical conditions. The copper wire provides a conductive channel and creates a predictable path for lightning, allowing scientists to precisely focus instruments and perform repeatable experiments close to the discharge channel. Electricity travels down the wire, vaporizing it in the first artificial strike and triggering return strokes through the air.

Dayeh and Engineer James J. Ramaekers calibrate an “acoustic camera,” an array of 15 microphones set 1 meter apart and mounted on tripods 1.2 meters above the ground.

The SwRI team’s “acoustic camera” comprised an array of 15 microphones set 1 meter apart and mounted on tripods 1.2 meters above the ground. The array faced the rocket launch pad where the copper wire was grounded and the triggered lightning would strike. A sealed aluminum box protected electronics and data acquisition components from the harsh electromagnetic noise and rain water associated with thunderstorms. Scientists communicated with the box via a multimode USB fiber optic extender connected to a laptop in a lightning-shielded control trailer. Rubber caps protected the microphones from water, wind, and excessive acoustic pressure. Scientists characterized the background noise and then collected digital signals from the microphones at 50 kHz for 10 seconds.

The team used a well-established signal processing technique known as “beamforming” to image the vertical profile of the channel. This technique allows scientists to shift recorded signals sequentially in time, based on the speed of sound and the spacing between the microphones. The technique then steers the net response of all the microphones in a specific direction, allowing directional amplification of the signal. The processed data is plotted on an x-y graph where the horizontal axis represents elapsed time and the vertical axis represents the measured acoustic response as a function of elevation along the lightning channel.

On July 14, 2014, a rocket was launched during a thunderstorm, producing triggered lightning. Electricity traveled down the wire, vaporizing the copper in a green bolt of lightning, followed by nine return strokes. Scientists processed the recorded sound signatures and created high-frequency, beam-steered images, which would have been impossible to do from afar.

The results were stunning. For the first time, the team imaged the sound waves that originate along different portions of a lightning channel. Besides the dramatic images, there are also important research implications. In natural lightning, the channel is a string of tortuous branches tens of meters long with each branch being a power source that generates a shockwave. Scientists could measure the different radiated outputs of various branches along the channel, estimating the energy that goes into each segment. These insights into lightning energetics could advance our understanding of its processes, such as how the stepped leaders advance and the air breaks down early in the discharge channel formation process.

By measuring the sounds emitted at different points along the channel and accounting for sound propagation and atmospheric effects, the SwRI scientists could trace the measured sound signals from the array back to their origin within the lightning channel. The result was the first acoustic image of thunder. Not only could the radiated sound be seen, but the projected shape of the lightning strike was apparent in the two-dimensional acoustic image. 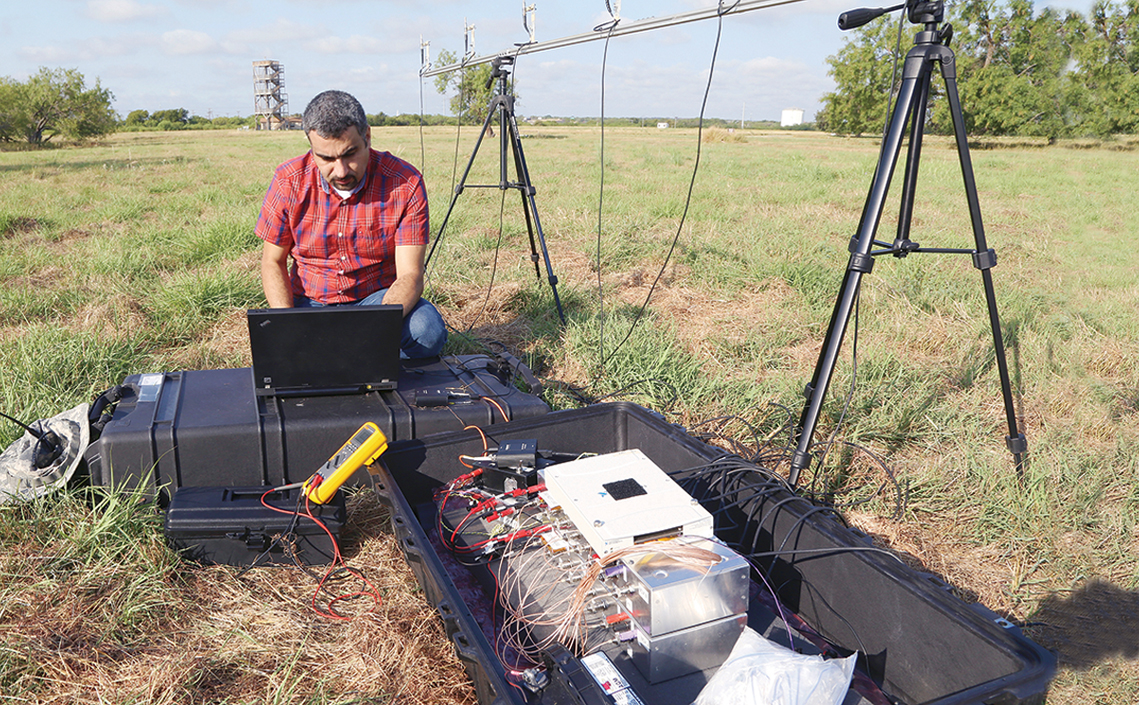 During the actual experiments in Florida, a sealed aluminum box protected electronics and data acquisition components from the harsh electromagnetic noise and rainwater associated with thunderstorms. Scientists communicated with the box via a multimode USB fiber optic extender connected to a laptop in a lightning-shielded control trailer

For the first time, SwRI scientists designed and developed a large acoustic camera that literally captures the “loudness of sound” radiated along the lightning channel. After accounting for propagation and atmospheric absorption effects, the SwRI team inferred a realistic acoustic profile of thunder very close to the channel, thus constructing a visualization of thunder that depicts how thunder would look if our ears could “see” it.

This successful proof of concept introduces a new method for imaging lightning. As with every new way of measuring something, it opens the door to conduct further measurements targeting specific questions. The team looks forward to expanding the capabilities of the thunder imager and using it to answer fundamental questions about the lightning process.