Ensuring the fleet of U.S. military aircraft remains operational, and, more important, flightworthy,  is a crucial component of our nation’s defense system. Understanding and maintaining the structural integrity of the airframes are critical to extending the lifespan to keep these aircraft flying.

The U.S. Air Force’s Aircraft Structural Integrity Program, or ASIP, provides engineering support throughout the lifetime of its aircraft, from design and testing to operational use and eventual retirement. The program was developed as a result of airframe structural failures surprising the Air Force during the Cold War, threatening the use of the medium-range B-47 strategic bomber. A concerted effort was made to fashion a structural life management methodology for military aircraft from data collected through a range of tasks, from full-scale fatigue tests to material characterization studies. The program has evolved to include the entire airframe lifecycle for all U.S. Air Force aircraft and has been refined into the guidance known as Military Standard 1530C, Aircraft Structural Integrity Program.

Southwest Research Institute (SwRI) engineers are an integral part of the ASIP program for the T-38 twin-jet trainer aircraft and the A-10 Thunderbolt II, both at SwRI headquarters in San Antonio and at the Ogden Air Logistics Center (ALC) at Hill Air Force Base, Utah, where SwRI engineers work alongside their Air Force structural engineering counterparts. SwRI has been involved in the T-38 program since the early 1980s and the A-10 since the late 1990s. Over the years, SwRI researchers also have performed work concerned with the primary airframe structure for a number of other Air Force aircraft, including the T-37, F-5, C-130, C-141, F-16, C-5 and others.

At present, engineers are conducting life analyses and full-scale testing on T-38 wings in a facility at SwRI’s headquarters and life analyses of the A-10 on-site at the Ogden ALC. This work is led by the Aerospace Structures Section of SwRI’s Mechanical Engineering Division and supported by researchers in the Division’s Materials Engineering Department and Sensor Systems and Nondestructive Evaluation Technology Department.

Dr. Kenneth Griffin stands in front of an SwRI-designed-and-built test frame in which an entire aircraft is suspended for testing. Griffin is manager of the Aerospace Structures Section in SwRI’s Mechanical Engineering Division. An aerospace engineer, he has 43 years of experience in research, development, test and evaluation of aircraft structures, including serving as chief of the Structures Division of the Air Vehicles Directorate, U.S. Air Force Research Laboratory. 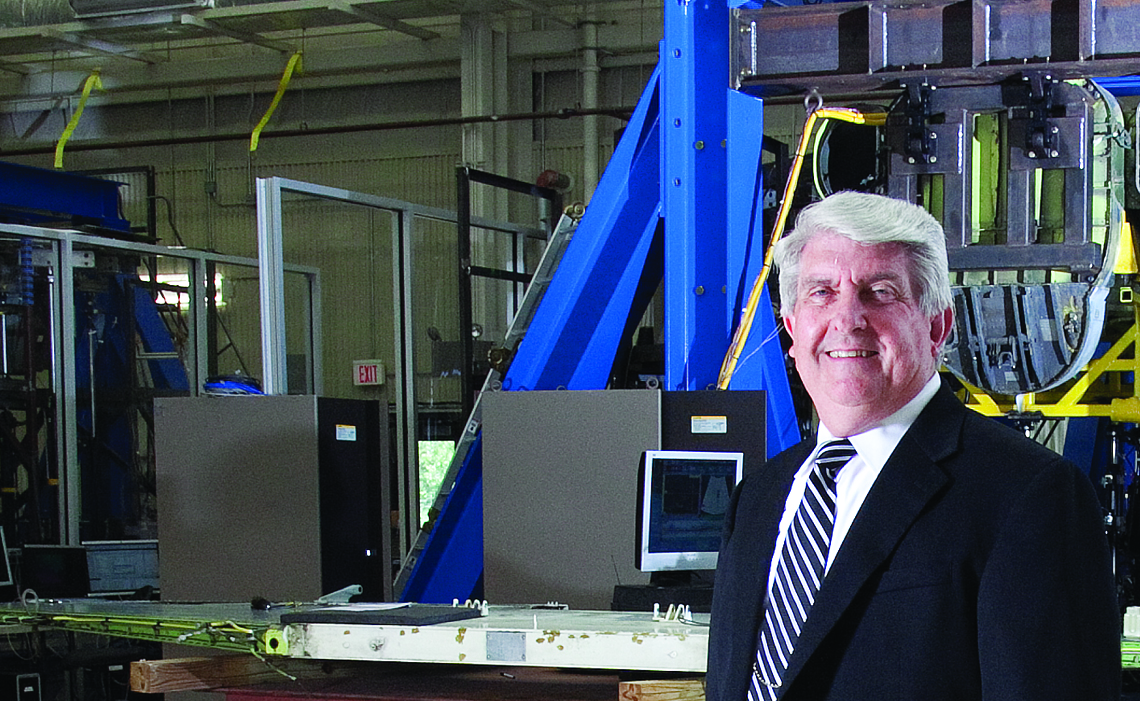 While SwRI engineers have, in some cases, been involved from the early  development stages of new aircraft, their primary workload in support of ASIP is geared toward sustaining the health of an aircraft’s structure during its operational lifetime, with metal fatigue being of primary concern. This entails character-izing the loads an aircraft generates during flight and using these loads in an array of analyses to predict structural fatigue. SwRI researchers conduct inspections and tests to confirm these structural life projections are valid for the primary structure of the aircraft.

An essential ingredient in the ASIP effort is to ensure predicted loads — the forces an aircraft is subjected to — are correct and representative of current and expected use. Structural load data sets for all aircraft operations are developed during wind tunnel testing and flight-test development of new aircraft. These external loads can be categorized as functions of aircraft maneuvers, speeds, altitudes, and gross weights, among others. Using these structural loads, structural life calculations can be developed from information about the aircraft’s mission(s) and the way it is being flown. The aircraft’s use must be understood and kept current to ensure structural life projections are correct.

To collect this valuable information, data recorders are installed on a number of aircraft in the operating fleet. A variety of SwRI-designed, built and installed  recorders are used for the T-38A and T-38B models. On other aircraft, such as the A-10, usage recording for structural assessments is achieved as part of digital records made for other systems, such as engines, internal systems and avionics. The A-10 recorders that monitor engine performance and maneuvers during flight and are used to calculate structural loads were developed by engineers in SwRI’s Aerospace Electronics, Systems Engineering and Training Division. SwRI engineers interpret these recordings into flight usage histories that are the basis for the analytical studies necessary for structural life projections.

These results are interpreted both manually and through SwRI-developed computer-automated procedures. There are multiple steps to catalog and organize this information into load sequences, or spectra, used for structural fatigue analyses. Statistical guidelines and engineering judgment also are often needed to reconcile unexpected recorded events to ensure the fatigue results are useful to determine the need for inspection, repair or replacement. 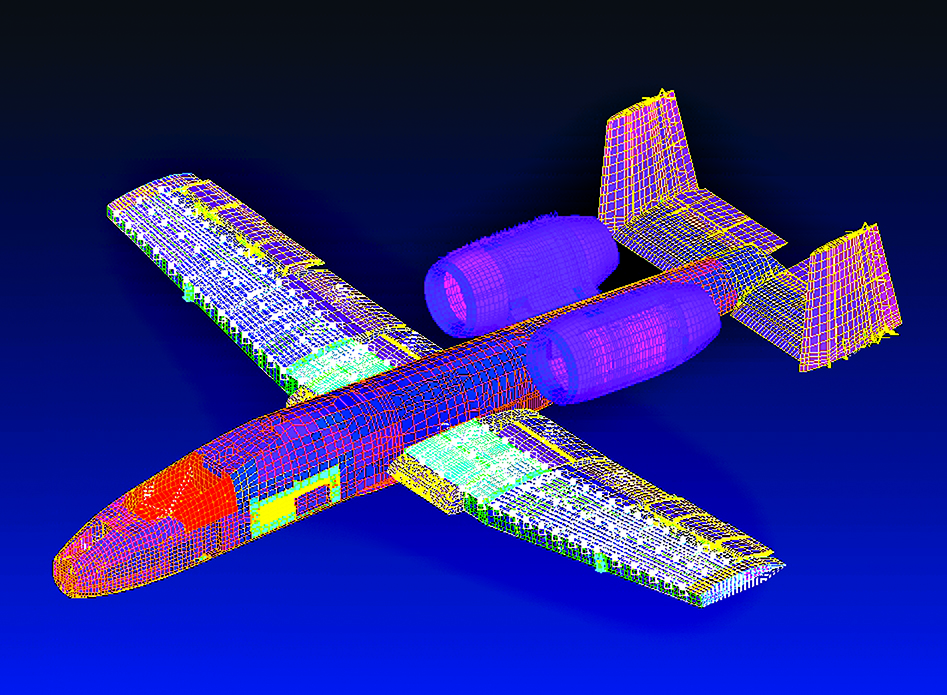 Finite element analysis models of an aircraft such as the one shown here are created to help identify fatigue-critical locations.

What is metal fatigue?

Areas of concern in an aircraft structure typically are defined as the aircraft is put through initial ground and flight testing, often guided by the structural analyses that were used in designing it. These locations, called hot spots, fatigue-critical locations (FCLs) or structural control points, are the focus of structural life calculations, inspections and maintenance throughout the life of the airframe. Fatigue is caused by repeated application of stress or force over a prolonged period. Critical joints or fasteners make up the majority of these FCLs and are continually tracked by ASIP engineers. As an aircraft ages and its  usage changes, these FCLs change, with additions made as field maintenance and ground testing uncover new areas of concern or as an aircraft structure is upgraded.

When locations throughout the aircraft structure are identified as FCLs, the appropriate analyses are identified to understand the potential for fatigue or failure. These locations often are  associated with fastener holes used to build the structural assemblies for wings, stabilizers, fins and engine mounts, among other items. Analytical modeling provides the predicted fatigue life of the FCLs. A large finite element analysis (FEA) model is created to provide the overall loads and deflection responses for the entire aircraft when the appropriate load distributions are applied. More detailed responses are often needed in the vicinity of the FCLs in the FEA model. Thus, the large model is augmented with very finely detailed FEA models that capture the details of geometry and attachments that are key to predicting how flaws in these areas grow into critical fatigue concerns such as cracks. The growth and migration of these flaws are then addressed by a battery of fatigue crack growth analysis packages, each geared to the type of flaw progression expected in an FCL. If possible, these analyses are confirmed using an array of material laboratory testing and larger ground testing. 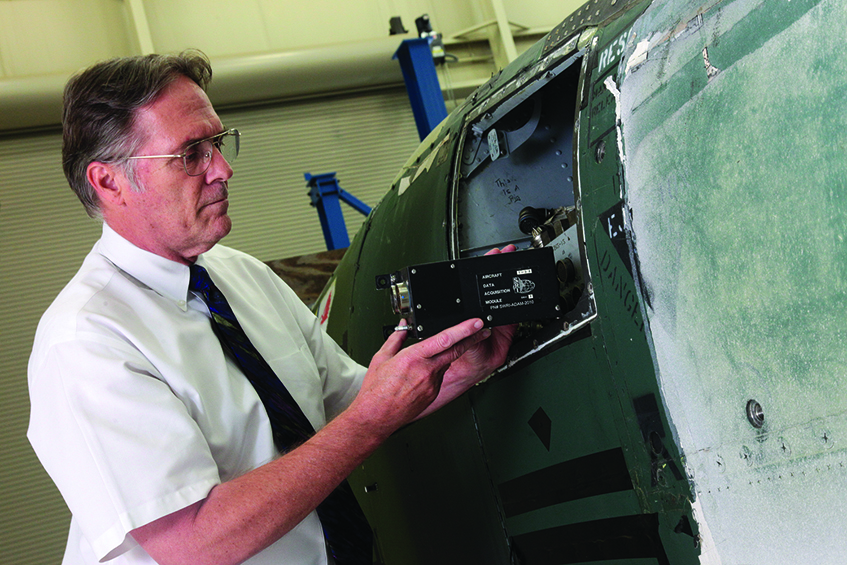 Various aerospace materials — aluminum, steel, titanium and more recently, composites — are developed to provide strength and crack growth resistance for each FCL. Characterizing the mechanical behavior of these materials as well as quantifying the means in which a fatigue crack propagates, or grows, is performed by SwRI’s Materials Engineering Department. With an understanding of damage tolerance assessment (DTA) methodology, unique testing is designed and executed to determine the fatigue and fracture properties characteristic of each material.  DTA assesses how long damage can be sustained before a repair is made. Additionally, for many aerospace materials, the fatigue crack growth behavior is also dependent on the load history. The periodic occurrences of more severe loadings, such as those resulting from turbulence, aggressive or evasive maneuvers or heavy landings, can actually have a beneficial effect by temporarily slowing, or retarding, the rate of fatigue crack growth. Though it may appear counter-intuitive, these severe loads can create temporary local zones near the flaw sites that inhibit fatigue cracks from passing through them. While not solely a  mechanical property of the material, these retardation effects are quantified by measuring the rate of fatigue crack growth on test samples that are representative of each FCL configuration and subject to a variable amplitude load spectrum representative of actual flight loads. Not accounting for these retardation effects would result in overly conservative assessments and indicate more frequent or unnecessary inspections.

SwRI has a long history of performing ground tests on aircraft to ensure all impor-tant areas of the aircraft structure are tracked properly. Currently SwRI has two sets of T-38 aircraft wings mounted on fuselage sections to conduct full-scale fatigue tests of flight hardware to assure that all important areas of the wing are tracked. Because the T-38 provides an array of training functions, two different fatigue tests are needed to properly reflect the two very different missions flown by the aircraft. The T-38 is used as the first high-performance trainer that new Air Force pilots use to “get their wings.” Thus, one of the wing tests reflects this kind of less severe usage. Since it is a high-performance supersonic trainer, Air Force pilots selected to become fighter pilots use the T-38 in another training sequence to begin their aggressive combat maneuver training. This much more demanding flying is reflected in the loads used for the other wing fatigue tests. Testing ranges from investigating key structural upgrades in the aircraft’s primary structure to suspending an entire aircraft in an SwRI-designed frame that uses hydraulic jacks to simulate in-flight distributed loads. 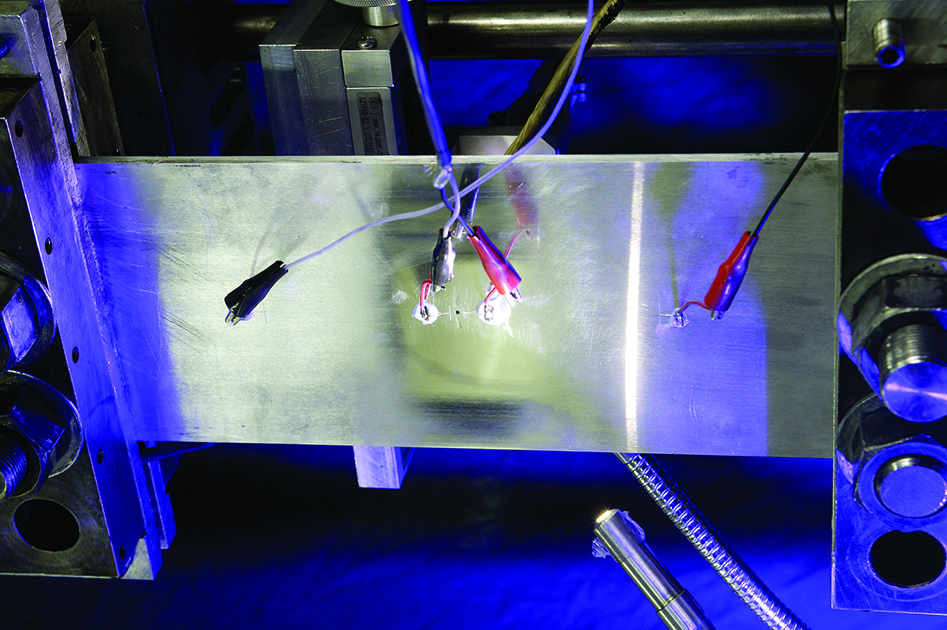 Holes are drilled in a material test sample to replicate fatigue-critical locations. The sample is then instrumented and subjected to various loads to study crack growth.

Measuring the aircraft’s hardware state-of-health is essential to assess airframe life. This entails testing and regular inspections. SwRI’s Sensor Systems and Non-destructive Evaluation Technology Department grew out of its initial involvement in nuclear power hardware inspection. The department has an Air Force-recognized superior capability to design sensing hardware, devise supporting hardware, develop calibration standards and inspection methods, and perform the most demanding inspections for aircraft structures. SwRI has designed sensors and calibration mechanisms that have been pivotal for nondestructive testing of the T-38 and A-10. SwRI engineers are also developing sensors that can be implanted in an airframe to provide structural health monitoring to improve prevention strategies.

The Aircraft Structural Integrity Program is constantly evolving to gain more use out of the Air Force fleet. Characterizations of structural life in terms of risk (probability of failure) are becoming more useful to support decisions about repair or replacement of an airframe structure. SwRI ASIP engineers are at the forefront in developing and employing these tools for the Air Force. SwRI has invested in development efforts that focus on better nondestructive evaluation and improved flaw growth analysis methods. Moving forward, a new family of aircraft structures is being introduced that uses advanced filamentary composite structural materials. These new materials are significantly affecting ASIP processes. SwRI researchers are among the cadre of Air Force and industry aircraft structural engineers conducting research into how these materials change the nature of ASIP, and are developing analyses, processes, and evaluation methods to ensure safe operation of advanced aircraft. 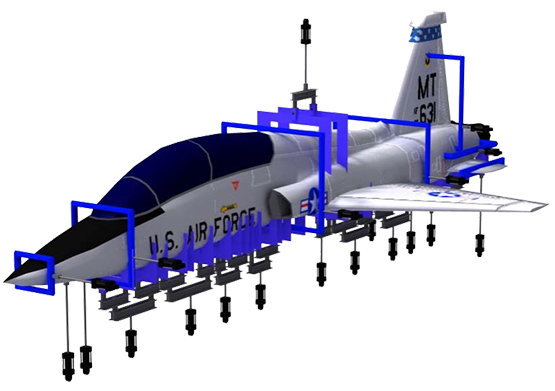 Hydraulic jacks are distributed along the aircraft to apply simulated loads from flight maneuvers. 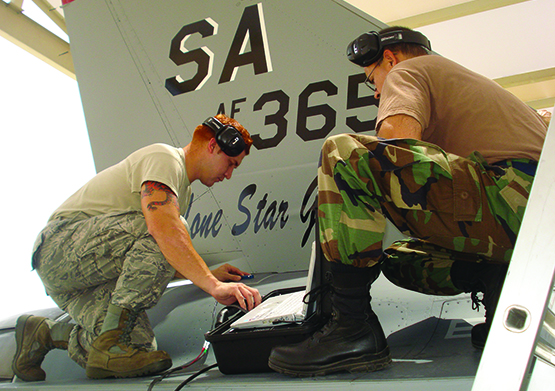