San Antonio — August 29, 2017 — A Southwest Research Institute (SwRI) study provides detailed models linking groundwater in a Texas aquifer to the surface flows in one of the state’s most pristine rivers. The study shows how karstic pathways of the Edwards-Trinity Aquifer follow the same channels as the Devils River watershed, creating natural springs that sustain the river.

“Natural springs play the major role in sustaining flows in rivers located in a semi-arid climate that experiences extended dry periods,” said Ron Green, the SwRI scientist who led the research. “This study clearly illustrates the linkage of groundwater flow with surface-water flow in the Edwards-Trinity Aquifer located within the Devils River watershed.”

The headwaters to the Devils River are located in Crockett, Schleicher and Sutton counties, semi-arid landscapes with limited development. The Devils River runs 93 miles southwest into Val Verde County and Lake Amistad near the border with Mexico in southwest Texas. As a key tributary of the Rio Grande, the river provides essential freshwater flows to South Texas and the Rio Grande Valley.

The research team replicated hydraulics in the Edwards-Trinity Aquifer by coupling computer models of surface water and groundwater. The models were conceptualized and developed with a broad range of data sets, including precipitation, run-off, surface-water flow, and water extraction records. The models show, for the first time, the strong interaction between pumping groundwater and spring discharge in the river channels.

Groundwater pumping in the upper watershed is limited to domestic livestock, a few irrigation wells, and the city of Sonora. Combined, those activities account for 3,000 to 7,000 acre-feet of annual pumping, starting in the 1960s. However, the water budget of the watershed is not well constrained due to unmetered wells and unreported pumping, according to the study.

SwRI developed computer models to test variable precipitation and recharge in the presence of different pumping scenarios and to simulate their effects on spring discharge in the upper portion of the river. The shifting of the headwaters downstream could be explained, Green said, by diminished spring discharge associated with the onset of pumping in the 1960s. The models indicate that this pumping led to “dewatering” Beaver Lake, a former perennial lake that is about 10 miles upstream from the current headwaters located at Pecan or Hudspeth Springs. Results from the study indicate that limited extraction of groundwater can impact a river in a semi-arid climate.

“This study provides, for the first time, the means to evaluate the relationship between groundwater pumping and spring discharge in the semi-arid environment encountered in the Edwards Plateau,” said Green. “These tools allow for water managers to evaluate water-resource strategies when administering the stewardship of this valuable resource.”

The findings of the study will be presented Aug. 30 at the Texas Groundwater Summit in San Marcos, Texas. 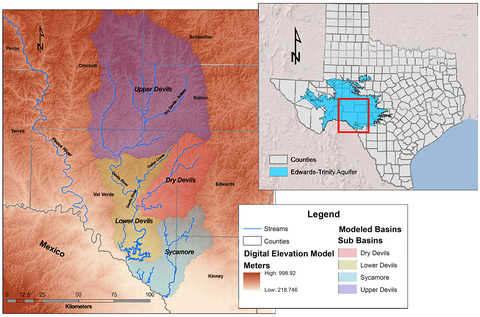