The Sun’s outer corona is the source of the solar wind, the stream of charged particles that flow outward from the Sun in all directions. Measured near Earth, the magnetic fields embedded within the solar wind are intertwined and complex.

“Previous images showed the outer corona as a smooth structure, but in deep space, the solar wind is turbulent and gusty,” said SwRI’s Dr. Craig DeForest, a solar physicist and lead author of “The Highly Structured Outer Corona,” an article published by Astrophysical Journal July 18, 2018. “Using new techniques to improve image fidelity, we realized that the corona is not smooth, but structured and dynamic. Every structure that we thought we understood turns out to be made of smaller ones, and to be more dynamic than we thought.”

To understand the corona, DeForest and his colleagues started with extended exposures of STEREO-A’s coronagraph images — pictures of the Sun’s atmosphere produced by a special telescope that blocks out light from the bright solar disk. The coronagraph is sensitive enough to image the corona in great detail, but in practice its measurements are polluted by noise both from the space environment and the instrument itself. The team’s key innovation was identifying and separating out that noise, boosting the signal-to-noise ratio and revealing the outer corona in unprecedented detail.

“We couldn’t tinker with the instrument itself, so we took a software approach, squeezing out the highest quality data possible by improving the data’s signal-to-noise ratio,” DeForest said. “We developed new filtering algorithms, designed and tested to delineate the true corona from the noisy measurements.”

The algorithms filtered out light and adjusted brightness. But the most challenging obstacle is inherent: blur due to the motion of the solar wind. “This technique adjusted images not just in space, not just in time, but in a moving coordinate system,” DeForest said. “That allowed us to correct motion blur not just by the speed of the wind, but by how rapidly features changed in the wind.”

With the resulting unprecedented view of the corona, the team made several groundbreaking discoveries. For example, coronal streamers — magnetic loops that can erupt into coronal mass ejections that send blobs of solar material into space — are far more structured than previously thought.

“What we found is that there is no such thing as a single streamer,” DeForest said. “The streamers themselves are composed of myriad fine strands that, together, average to produce a brighter feature.”

Then there’s the theoretical Alfvén surface — a proposed surface, or sheet-like layer where the gradually accelerating solar wind reaches a critical speed. But that’s not what DeForest’s team observed.

“What we found is that there isn’t a clean Alfvén surface,” DeForest said. “There’s a wide ‘no-man’s land’ or `Alfvén zone’ where the solar wind gradually disconnects from the Sun, rather than a single clear boundary.”

And the close look at the coronal structure also raised new questions. Techniques used to estimate the speed of the solar wind revealed that the wind suddenly changes its character at a distance of around 10 solar radii, well within the conventional boundary of the corona itself.

“Some interesting physics is happening around there,” DeForest said. “We don’t know what it is yet, but we do know that it is going to be interesting.”

These first observations will provide key insight for NASA’s upcoming Parker Solar Probe, the first-ever mission to gather measurements from within the outer solar corona.

The NASA Living with a Star program, managed by the Goddard Space Flight Center, funds the STEREO mission and supported this research with a targeted research and technology grant. The COR-2 instrument was built and is operated by the Naval Research Laboratory as part of the STEREO mission. 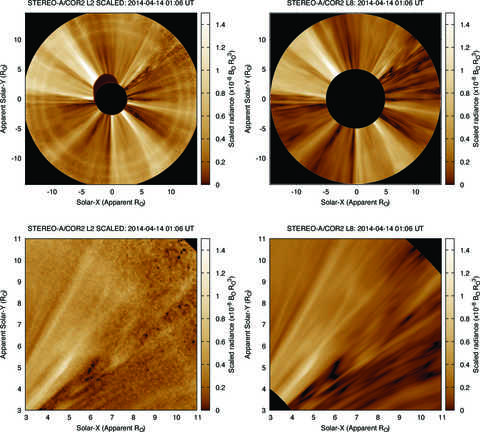 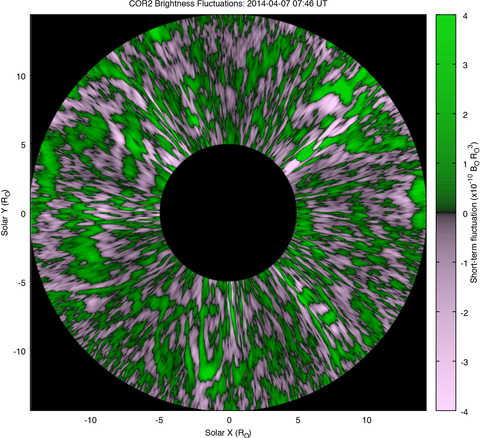