To showcase the technology, SwRI engineers took a mid-size sedan and modified the current-production 4-cylinder 2.0L gasoline engine so that exhaust from one dedicated cylinder is run with a rich mixture of fuel and air to reform gasoline fuel exhaust into carbon monoxide and hydrogen. This “reformate” exhaust gas is then cooled and looped into a patented mixer where the EGR and reformate are mixed with fresh air before going into the engine intake.

“This technology developed by our automotive engineers is a significant leap forward in gasoline engine design. Recirculating exhaust gasses this way improves engine efficiency and fuel economy while simultaneously lowering exhaust emissions,” said Bruce Bykowski, vice president of SwRI’s Engine, Emissions and Vehicle Research Division. “With our D-EGR demonstration vehicle, the Institute has a made a significant investment to validate the technology as a viable, production-ready alternative for automotive manufacturers.”

Advances in engine design such as the D-EGR technology are especially critical given the current and upcoming regulatory climate. By 2025, automobile manufacturers will have to meet CAFE standards of 54.5 miles per gallon. The Environmental Protection Agency is also expected to release new, more stringent emissions standards. Those two factors mean there is considerable industry focus on simultaneously improving both emissions and fuel efficiency, challenges which SwRI’s demonstration vehicle addresses.

“The D-EGR concept takes the best attributes of regular cooled EGR and combines them with in-cylinder reformer technology. We segregate the exhaust of a cylinder of the engine so that one cylinder provides all of the recirculated exhaust gas back into the intake manifold,” said Dr. Terry Alger, assistant director in SwRI’s Engine, Emissions and Vehicle Research Division.

“By running one cylinder rich, the excess fuel is reformed into hydrogen and carbon monoxide,” added Chris Chadwell, manager of SwRI’s Spark Ignition Engine R&D section. “The in-cylinder reformation slightly reduces the carbon dioxide and water vapor while producing large volumes of carbon monoxide, which is a good fuel, and hydrogen, which is an outstanding fuel. That provides an octane boost and a flammability boost.”

SwRI has won 38 R&D 100 Awards since 1971. Widely recognized as the “Oscars of Invention,” R&D 100 Awards are selected by an independent panel of judges and editors of R&D Magazine and identify and celebrate the top technology products of the year. This year’s award will be presented Nov. 7, 2014, in Las Vegas.

The Engine, Emissions and Vehicle Research Division, along with the Fuels and Lubricants Research Division, comprise SwRI’s Automotive Engineering capabilities. The Institute is internationally known for its engine design and development activities and continues to uphold a longstanding tradition of quality and client response started almost 70 years ago. 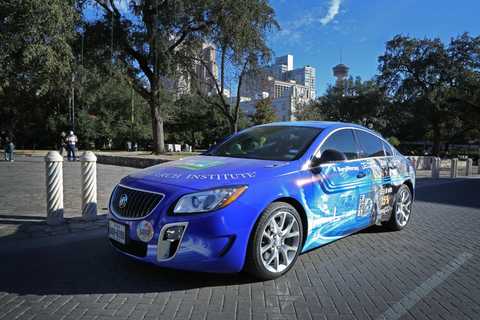