January 5, 2022 — A Southwest Research Institute scientist contributed to a new solar system formation model that explains the existing inner planetary distribution and the asteroid belt between the inner and outer solar system. SwRI’s Dr. Rogerio Deienno, who specializes in celestial mechanics and dynamical astronomy, and his colleagues developed a model where three rings of planetesimals, the building blocks for planets, would form from the swirling disk of gas and dust around the Sun known as the solar nebula.

“As dust particles move slightly faster than the gas around them, they feel a headwind and drift very quickly toward the star,” said Deienno, who contributed to a Nature Astronomy paper discussing this research.  “At ‘pressure bumps’ — regions in the disk usually associated with localized changes in disk composition and the size of dust grains — gas pressure increases, gas molecules move faster and solid particles stop feeling the headwind. That allows dust particles to accumulate at these pressure bumps forming rings separated by gaps.”

Images collected by the Atacama Large Millimeter/submillimeter Array (ALMA) observatory showing a disk around a young star in unprecedented detail as a nested structure of rings provided a premise for a ring-based model. The model assumes millimeter- to centimeter-sized dust and pebbles accumulate at pressure bump locations and collapse due to their collective gravity into much larger, 100-kilometer-sized planetesimals, the building blocks for planets. According to this new model, planetesimals would form in three rings, each around a sublimation front: the inner silicate ring, the middle water ring and the outer carbon monoxide ring.

“As time goes by, the disk temperature cools,” Deienno said. “This cooling process causes the pressure bumps to migrate toward the Sun, with the first planetesimals forming at the outer edge of each ring. Assuming the disk composition at atomic levels also changes with time, the planetesimal compositions should be slightly different across each ring.”

That’s where Deienno’s simulations came in, connecting the forming rings of planetesimals associated with the silicate sublimation front, the inner ring, to the growing terrestrial planets.

“Andre Izidoro, the lead author from Rice University, generated the distributions of planetesimals formed in the rings,” Deienno said. “Then I simulated the entire collisional growth process during the gas disk lifetime until the terrestrial protoplanets formed. This allowed us to track the compositional evolution and feeding zones of Earth, Venus and Mars as well as the compositional link between Mars and the main asteroid belt.”

Using supercomputers, the researchers performed a variety of simulations that captured how our solar system may have formed right down to the slightly different chemical compositions and masses of Venus, Earth and Mars. The Earth and Venus analogs collect the most materials forming the bulk from regions closer to the Sun, whereas the Mars-like planet was built from materials in the more sparsely populated regions farther from the Sun.

Beyond the orbit of Mars, the simulations yielded a region sparsely populated or completely devoid of planetesimals. Some planetesimals from zones inside or directly beyond would later stray into the asteroid belt region, become trapped and collide, creating fragments today known as asteroids. 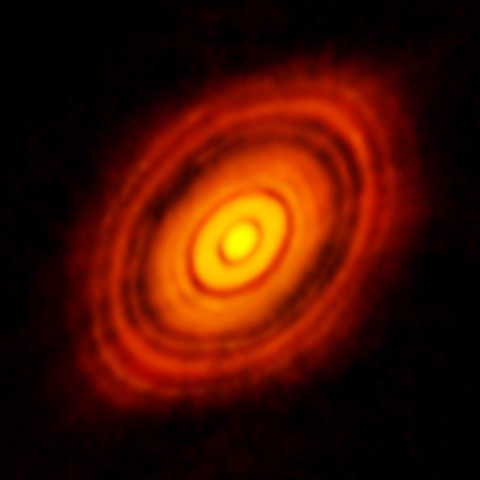