February 25, 2020 — An ultraviolet spectrograph (UVS) designed and built by Southwest Research Institute (SwRI) is the first scientific instrument to be delivered for integration onto the European Space Agency’s Jupiter Icy Moon Explorer (JUICE) spacecraft. Scheduled to launch in 2022 and arrive at Jupiter in 2030, JUICE will spend at least three years making detailed observations in the Jovian system before going into orbit around the solar system’s largest moon, Ganymede.

Aboard JUICE, UVS will get close-up views of the Galilean moons Europa, Ganymede and Callisto, all thought to host liquid water beneath their icy surfaces. UVS will record ultraviolet light emitted, transmitted and reflected by these bodies, revealing the composition of their surfaces and tenuous atmospheres and how they interact with Jupiter and its giant magnetosphere.

“It has been a huge team effort to get this instrument — known as JUICE-UVS — built, tested and delivered,” said Steven Persyn, project manager for JUICE-UVS and an assistant director in SwRI’s Space Science and Engineering Division. “In 2013, UVS was selected to represent NASA on the first ESA-led mission to an outer planet. Meeting both NASA’s and ESA’s specifications was challenging, but we did it.”

UVS will be one of 10 science instruments and 11 investigations for the JUICE mission. The mission has overarching goals of investigating potentially habitable worlds around the gas giant, as well as, studying the Jupiter system as an archetype for gas giants in our solar system and beyond.

SwRI has provided ultraviolet spectrographs for other spacecraft, including ESA’s Rosetta comet orbiter, NASA’s New Horizons spacecraft to Pluto and the Kuiper Belt, the Lunar Reconnaissance Orbiter, and the Juno spacecraft now orbiting Jupiter. Another UVS is under construction for NASA’s Europa Clipper mission, scheduled to launch not long after JUICE.

“JUICE-UVS is the fifth in this series of SwRI-built ultraviolet spectrographs, and it benefits greatly from the design experience gained by our team from the Juno-UVS instrument, which is currently operating in Jupiter’s harsh radiation environment,” Persyn said. “Each successive instrument we build is more capable than its predecessor.”

JUICE is the first large-class mission in ESA’s Cosmic Vision 2015–2025 program. The spacecraft and science instruments are being built by teams from 15 European countries, Japan and the United States. SwRI’s UVS instrument team includes additional scientists from the University of Colorado Boulder, the SETI institute, the University of Leicester (UK), Imperial College London (UK), the University of Liège (Belgium), and the Laboratoire Atmosphères, Milieux, Observations Spatiales (France). The Planetary Missions Program Office at NASA’s Marshall Space Flight Center oversees the UVS contribution to ESA through the agency’s Solar System Exploration Program. The JUICE spacecraft is being developed by Airbus Defence and Space. 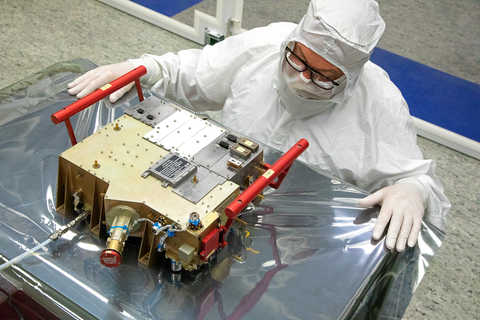