SwRI acquired a variable angle spectroscopic ellipsometer, or VASE, to develop efficient techniques for measuring deposits in fuel injectors at nanoscales. We plan to adapt VASE technology for other component tests.

Last year, vehicles transported 11 billion tons of freight, more than $32 billion worth of goods each day, and moved people more than 3 trillion vehicle-miles. Southwest Research Institute is involved in nearly every facet of automotive and transportation research, from powertrains to fuels and lubricants to intelligent highways and connected and automated vehicles. We also research power systems, emissions and fluids for heavy-duty, locomotive, marine and aircraft engines.

New technical options are dramatically changing how the commercial and passenger vehicle industry is addressing traditional emissions and fuel economy challenges. For example, the commercial vehicle industry is now pursuing electrification for both on- and off-road equipment. New areas of SwRI research include using automated and connected vehicle technology to reduce emissions, while conventional engines and emissions technologies continue to present new challenges.

The electrification of heavy-duty vehicles today is probably where light-duty hybrid vehicles were 20 years ago. As we help the industry electrify heavy-duty vehicles, we’ve discovered the scale-up process is not linear. The bigger the vehicle, the bigger the challenges are to electrify it. Somewhat surprisingly, some of our most promising new research in improving vehicle efficiency does not involve the engine or the vehicle, but rather the concept of connected powertrains.

As vehicle manufacturers strive for single-digit percentage improvements in energy efficiency, SwRI powertrain engineers are working with intelligent transportation specialists to use connected vehicle technology to produce almost 20% energy savings. Connected vehicles share information with other vehicles and roadway technology to improve traffic flow. Now the technology is allowing the Advanced Research Projects Agency–Energy NEXTCAR program to produce more than 15% savings on dynamometer tests and 30% in simulations. This represents a higher impact by an order of magnitude over typical incremental engine or transmission improvements. Two years into this three-year program, NEXTCAR project results are exceeding the 20% goal. Follow-on work awarded with the DOE Vehicle Technology Office includes adding situational awareness at intersections. 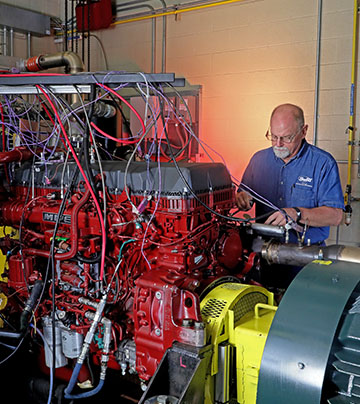 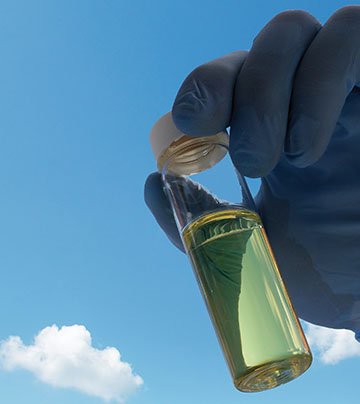 SwRI is working with a client to develop a unique diesel fuel formulation that significantly reduces both soot and oxides of nitrogen emissions. This is an important advance, considering that diesel emission control techniques typically involve a trade-off between NOx and soot reduction. 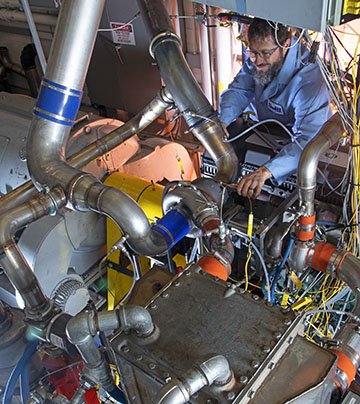 As the diesel engine continues to move most of the world’s freight, SwRI is developing some of the cleanest and most fuel-efficient technology to date. A multiclient collaborative heavy-duty engine program demonstrated a 90% reduction in tailpipe NOx emissions while also achieving a 3% reduction in diesel consumption and greenhouse gas emissions. SwRI uses a systems approach to integrate novel engine, aftertreatment and control technologies with several advanced hardware technologies, including new catalyst formulations and configurations and a valvetrain-based cylinder deactivation system. Another key to the development is an internally developed model-based aftertreatment control system.

As part of the Clean High-Efficiency Diesel Engine (CHEDE) VII Consortium, SwRI is closing in on 50% heavy-duty diesel engine efficiency while achieving ultra-low tailpipe emissions. Combining combustion and boost system improvements with friction-reducing technology is helping meet this goal. The next phase, CHEDE-8, launched in November 2019.

Natural gas engines offer a low-cost pathway to near-zero emissions but are not as efficient as their diesel counterparts. Using dedicated exhaust gas recirculation (D-EGR®) technology, SwRI is working with the California Energy Commission to improve the efficiency of a compressed natural gas engine by 10% while maintaining near-zero NOx emissions using a three-way catalyst. A 10% improvement in efficiency would make operational costs comparable to diesel at a lower initial cost, reducing the overall cost of ownership. 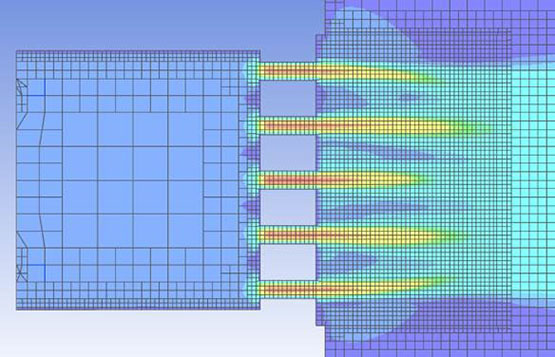 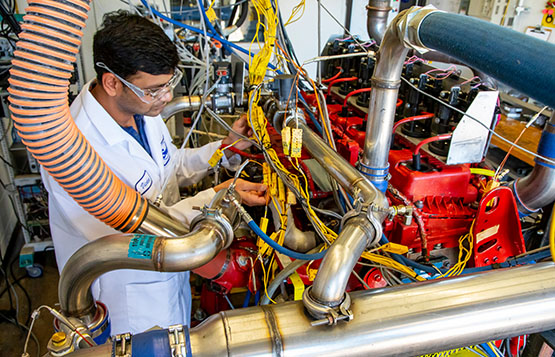 For the Coordinating Research Council, we developed and demonstrated a new test that significantly reduces the time and fuel needed to evaluate internal deposits on diesel engine fuel injectors. Traditionally, these tests relied on visual assessments to characterize deposits, requiring hundreds of hours of testing using several thousand gallons of fuel. Adapting technology from the microchip manufacturing industry decreased that to seven hours and about seven liters of fuel. Using a variable angle spectroscopic ellipsometer, or VASE, engineers can measure deposits at nanometer scales, well below what a human eye can discern. We plan to adapt VASE technology to other component tests.

As the industry develops more durable materials and better friction-reduction technology for an engine’s moving parts, lubricant manufacturers seeking to improve their products must search for what amounts to a finer needle in a larger haystack. To upgrade a gasoline wear test, engineers are replacing mechanical wear-measuring instruments with radioactive tracer testing, a technology that SwRI helped pioneer. The project is mapping wear patterns between every pair of metal engine parts in contact with each other when an engine operates, such as timing chains, rings, cylinder liners and main bearings. Parts under study are irradiated selectively and then installed in an engine. As the engine runs, its lubricant is pumped through a chamber where radiation associated with worn-away metal from those parts is detected and measured precisely. SwRI hopes to integrate this improved measurement process into standardized tests.

We are investigating how regenerative dynamometers for heavy-duty diesel engines could help SwRI improve its environmental impact. As test cell dynamometers absorb engine power, they produce friction heat, which is typically dissipated with water from a cooling tower, wasting both energy and water. Attaching the dyno to an electrical generator not only produces energy and water savings but also generates electricity that can be sent to the grid to offset SwRI’s power consumption. 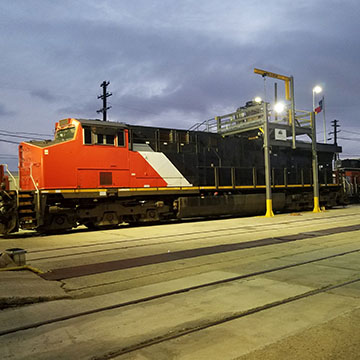 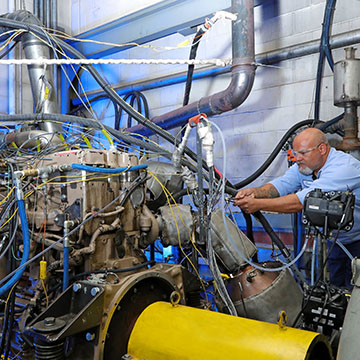 In 2019, SwRI conducted a multiclient collaborative program, developing a heavy-duty engine to achieve 90% NOx emission reduction over real-world driving conditions where catalyst temperatures are typically below the optimum level. 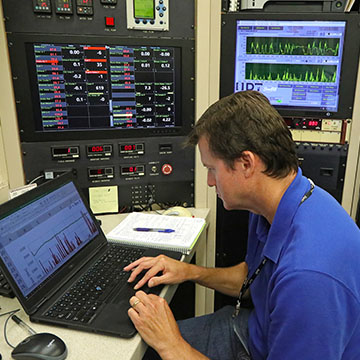 In a related area, SwRI is also a leader in connected vehicle (CV) and automated driving technologies. Connected vehicles communicate with the infrastructure and other vehicles to enhance mobility and vehicle fuel efficiency. In 2019, we supported the installation of Georgia’s comprehensive CV system in the Atlanta area, including 350 of over 1,700 dedicated short-range communication roadside units. SwRI is leading the extensive project, which includes configuring and integrating technology with existing traffic signal controllers, testing and validating systems interoperability, and ensuring standards compliance. In partnership with local agencies, we are developing a range of CV applications such as signal phase countdown, green speed recommendations, red light violation warnings, and signal prioritization and preemption for transit vehicles and emergency responders.

CV technology is a cornerstone for tomorrow’s automated vehicles, which also use sensor and localization technologies to navigate and maintain roadway position. SwRI fuses these technologies for diverse applications, from passenger cars to military vehicles designed to keep soldiers out of harm’s way. In 2019, SwRI worked with a commercial client to develop a low-cost, low-speed public personal mobility service using an automated golf cart. The application uses SwRI-developed localization technology to navigate via maps of road surfaces and a vehicle control server.