Musculoskeletal biomechanics focuses on numerous servo-hydraulic and servo-electric materials testing systems to characterize the material and mechanical properties of both biological materials and biomaterials. We have developed a number of specialized in situ microscopy testing systems that allow high-fidelity imaging of test specimens while undergoing controlled deformation to study the micromechanical behavior of biological tissue, including tension, compression, creep and relaxation, fatigue, fracture toughness, and whole bone strength testing.

The Shore Western Hip Wear Simulator allows simultaneous component wear testing of six acetabular cup and femoral head components under simulated loading as would be experienced during normal locomotion. Additionally, six implant constructs can be tested under axial loading only (i.e., no rotational component) and used as soak controls, if desired. A number of loading profiles are available for specifying the applied axial load during wear and soak control testing, and the system can be set for cyclic rates of up to 1.5 Hz. We maintain numerous facilities that are available to isolate and characterize the spatial distribution of implant wear as well as the resulting particulate. 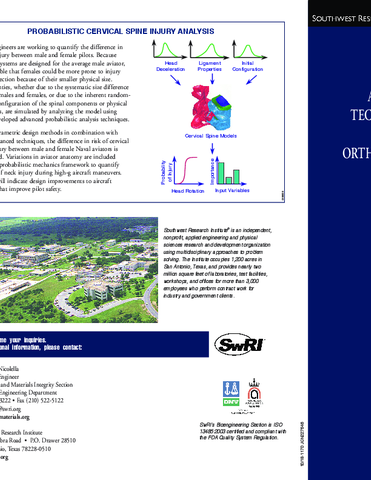