Imported foods continue to be a concern as the U.S. food supply becomes more global. In 2007, the media reported widely about pet food products that sickened thousands of cats and dogs. It was determined that wheat gluten imported from China had been adulterated with the industrial chemical melamine, which standard testing methods can misinterpret to indicate artificially high protein content. The next year, in 2008, hundreds of Chinese infants were sickened when melamine was added to infant formula in that country.

In response to concerns for the safety of imported foods, we have tested a wide range of imported products for melamine and cyromazine, a compound which is a metabolite of melamine. Our team developed several analytical methods for these compounds, including a simple screening run using LC for samples that were not expected to contain the target compounds. Meanwhile, GC/MS and LC/MS/MS analyses were run on products with a tentative positive detection using LC, as well as products about which little was known, to provide a simultaneous identification and confirmation. One or both of the chemicals were found in several products, but at relatively low levels. The levels detected did not indicate an intentional adulteration of the product. 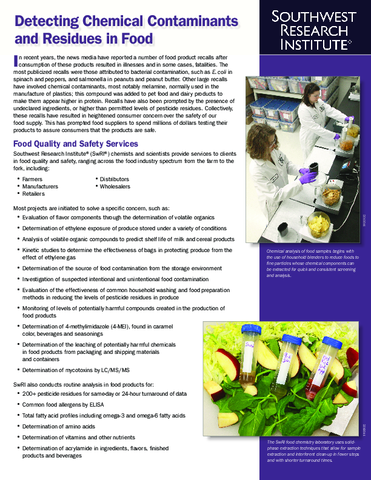