September 9, 2020 — A new study in JGR Planets posits that the major particle ejections off the near-Earth asteroid Bennu may be the consequence of impacts by small, sand-sized particles called meteoroids onto its surface as the object nears the Sun. The study’s primary author is Southwest Research Institute scientist Dr. William Bottke, who used data from NASA’s OSIRIS-REx mission.

Launched in 2016, NASA’s OSIRIS-REx spacecraft is currently orbiting Bennu with the aim of briefly touching on the surface and obtaining a sample from the asteroid in October 2020, and then returning to Earth.

“While in orbit, the spacecraft has been sending images of Bennu back to Earth,” Bottke said. “One of the most significant things we’ve noticed is that the asteroid is frequently ejecting materials into space. Tiny rocks are just flying off its surface, yet there is no evidence that they are propelled by sublimating ice, as one might expect from a comet. The biggest events launch rocks as large as a few centimeters.”

Even more curious is the fact that the observed major ejection events tend to occur in the late afternoon on Bennu. Determined to get to the bottom of these events, Bottke reached out to Althea Moorhead at NASA’s Marshall Space Flight Center. Moorhead is a member of NASA’s Meteoroid Environment Office, a group that monitors and models meteoroids that may be hazardous to spacecraft.

“Over the years, Althea and her team have built a computer model that determines the number of tiny particles impacting spacecraft,” Bottke explained. “We used this software to calculate the number of meteoroid impacts Bennu would face in its current orbit.”

Many meteoroids originated on comets. As comets approach the Sun, pieces break off as a consequence of solar heating. Some comets even break apart, producing far more small particles than asteroid collisions in the asteroid belt. For this reason, comet fragments are thought to be the major source of meteoroids that fill the inner solar system.

Interpreting their modeling results, Bottke’s study suggests that as Bennu draws closer to the Sun in its orbit, it experiences a higher number of meteoroid impacts. Moreover, sand-sized meteoroids are predicted to hit Bennu with the force of a shotgun blast about once every two weeks, with most striking in the head-on direction. Their impact location on Bennu corresponds to late afternoon and early evening.

Furthermore, Bottke’s study points out that the Lunar Atmosphere and Dust Environment Explorer (LADEE) previously made similar observations about impacts on the Moon. As with Bennu, most meteoroids hit the Moon head-on (with head-on defined with respect to the motion of the Earth-Moon system around the Sun). The key difference between Bennu and the Moon is how they rotate around their spin axes. The Moon spins west to east, so head-on impacts correspond to sunrise. Bennu spins in the opposite direction, so head-on impacts hit near dusk.

At first, Bottke’s modeling work seem to predict that meteoroids would eject too little material from Bennu to explain the OSIRIS-REx observations. However, a better match could be obtained if Bennu has a weak porous surface. The possibility that Bennu has this property was recently strengthened by studies of the Bennu-like asteroid Ryugu, the target of Japan’s Hayabusa2 sample return mission.  Using explosives to launch a small projectile into Ryugu, the Hayabusa2 team produced a crater that was larger than expected by most impact experts.  If Bennu’s surface is indeed similar to Ryugu’s, meteoroid impacts should be capable of ejecting relatively large amounts of debris. 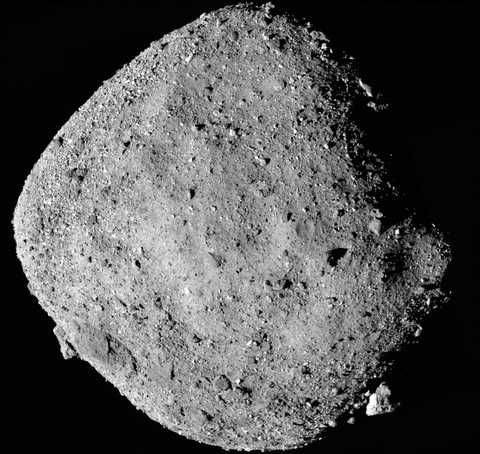