February 10, 2021 — A Southwest Research Institute scientist has updated Mars chronology models to find that terrains shaped by ancient water activity on the planet’s surface may be hundreds of millions of years older than previously thought. This new chronology for Mars, based on the latest dynamical models for the formation and evolution of the solar system, is particularly significant as the days count down until NASA’s Mars 2020 Perseverance rover lands on the Red Planet on February 18, 2021.

Unlike on Earth, where terrains are commonly dated using natural radioactivity of rocks, scientists have largely constrained the chronology of Mars by counting impact craters on its surface.

“The idea behind crater dating is not rocket science; the more craters, the older the surface,” says SwRI’s Dr. Simone Marchi, who published a paper about these findings in The Astronomical Journal. “But the devil is in the details. Craters form when asteroids and comets strike the surface. The rate of these cosmic crashes over the eons is uncertain, hampering our ability to convert crater numbers to terrain ages. I took a fresh look at this and built on recent developments in the way we understand the earliest evolution of the solar system.”

Scientists have used radiometric ages of precious lunar rocks brought back by the Apollo missions to calibrate a lunar crater chronology. This lunar chronology is then extrapolated to Mars, and this is where things get tangled with the earliest evolution of the solar system. Our understanding of the time evolution of lunar and Martian impact rates has greatly improved in recent years. The present model improves upon how the critical Moon-to-Mars extrapolations are done.

“For this paper, I looked particularly at the Jezero Crater because that is the landing site for the Mars 2020 Perseverance rover,” Marchi said. “These surfaces could have formed over 3 billion years ago, as much as 500 million years older than previously thought. NASA plans to have Perseverance gather and package surface samples that can be collected by a future mission for return to Earth for radiometric dating. That could provide vital ground-truth data to better calibrate our chronology models.”

Jezero Crater has a diameter of about 30 miles located within the 750-mile-wide Isidis Basin, created by an earlier impact. The latter cut a wide portion of the Borealis Basin’s rim, perhaps the largest and oldest impact basin on Mars. This coincidence of nested craters is of particular interest as samples from these terrains may return information about the timing of these consecutive impacts.

Furthermore, Jezero Crater hosts clay-rich terrains and a fluvial delta, indications that the crater once hosted a lake. This makes the Jezero Crater an ideal place to fulfill the Mars 2020 mission’s science goal of studying a potentially habitable environment that may still preserve signs of past life. As such, understanding the timeline of these surfaces is particularly important.

The new model also provides a revised age for Isidis Basin, now estimated to be 4-4.2 billion years old, providing an upper limit for the formation of Jezero Crater and water activity at this location on Mars. 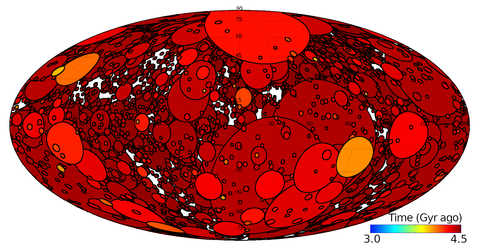 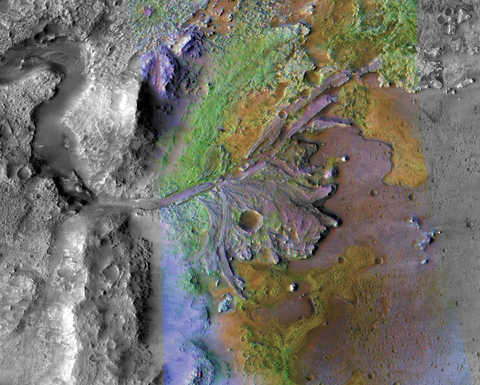