February 3, 2020 — Using data from NASA’s Parker Solar Probe (PSP), a team led by Southwest Research Institute identified low-energy particles lurking near the Sun that likely originated from solar wind interactions well beyond Earth orbit. PSP is venturing closer to the Sun than any previous probe, carrying hardware SwRI helped develop. Scientists are probing the enigmatic features of the Sun to answer many questions, including how to protect space travelers and technology from the radiation associated with solar events.

“Our main goal is to determine the acceleration mechanisms that create and transport dangerous high-energy particles from the solar atmosphere into the solar system, including the near-Earth environment,” said Dr. Mihir Desai, a mission co-investigator on the Integrated Science Investigation of the Sun (IS☉IS) instrument suite, a multi-institutional project led by Principal Investigator Prof. Dave McComas of Princeton University. IS☉IS consists of two instruments, Energetic Particle Instrument-High (EPI-Hi) and Energetic Particle Instrument-Low (EPI-Lo). “With EPI-Lo, we were able to measure extremely low-energy particles unexpectedly close to the solar environment. We considered many explanations for their presence, but ultimately determined they are the smoking gun pointing to interactions between slow- and fast-moving regions of the solar wind that accelerate high-energy particles from beyond the orbit of Earth. Some of those travel back toward the Sun, slowing against the tide of the outpouring solar wind but still retaining surprisingly high energies.”

PSP, which will travel within 4 million miles of the Sun’s surface, is collecting new solar data to help scientists understand how solar events, such as coronal mass ejections, impact life on Earth. During the rising portion of the Sun’s activity cycle, our star releases huge quantities of energized matter, magnetic fields and electromagnetic radiation in the form of coronal mass ejections (CMEs). This material is integrated into the solar wind, the steady stream of charged particles released from the Sun’s upper atmosphere. The high-energy solar energetic particles (SEPs) present a serious radiation threat to human explorers living and working outside low-Earth orbit and to technological assets such as communications and scientific satellites in space. The mission is making the first-ever direct measurements of both the low-energy source populations as well as the more hazardous, higher energy particles in the near-Sun environment, where the acceleration takes place.

When the Sun’s activity reaches a lull, roughly about every 11 years, solar equatorial regions emit slower solar wind streams, traveling around 1 million miles per hour, while the poles spew faster streams, traveling twice as fast at 2 million miles per hour. Stream Interaction Regions (SIRs) are created by interactions at boundaries between the fast and slow solar wind. Fast-moving streams tend to overtake slower streams that originate westward of them on the Sun, forming turbulent corotating interaction regions (CIRs) that produce shock waves and accelerated particles, not unlike those produced by CMEs.

“For the first time, we observed low-energy particles from these CIRs near the orbit of Mercury,” Desai said. “We also compared the PSP data with data from STEREO, another solar energy probe. By measuring the full range of energetic populations and correlating the data with other measurements, we hope to get a clear picture of the origin and the processes that accelerate these particles. Our next step is to integrate the data into models to better understand the origin of SEPs and other materials. Parker Solar Probe will solve many puzzling scientific questions — and is guaranteed to generate new ones as well.”

This research is described in the paper “Properties of Suprathermal-through-Energetic He Ions Associated with Stream interaction regions Observed over Parker Solar Probe’s First Two Orb­­its,” published February 3 in a special issue of the Astrophysical Journal Supplement Series devoted exclusively to the first science results from the Parker Solar Probe mission. PSP is part of NASA’s “Living With a Star” program to explore aspects of the Sun-Earth system that directly affect life and society. The Living With a Star flight program is managed by NASA’s Goddard Space Flight Center in Greenbelt, Maryland, for NASA’s Science Mission Directorate in Washington. The Johns Hopkins University Applied Physics Laboratory in Laurel, Maryland, manages the mission for NASA. APL designed and built the spacecraft and is operating it. The IS☉IS instrument suite has two instruments mounted to the spacecraft on an SwRI-designed and fabricated bracket. The EPI-Lo instrument measures the lower-energy particles. SwRI collaborated with the California Institute of Technology (Caltech) in the mechanical fabrication and analyses for the EPI-Hi instrument, which measures the higher-energy materials. Data from the IS☉IS instrument suite are processed by the IS☉IS Science Operations Center led by Prof. Nathan Schwadron at the University of New Hampshire. In addition to Princeton, JHU/APL, Caltech, SwRI and UNH, the ISʘIS team also includes scientists and engineers from NASA Goddard Space Flight Center, NASA Jet Propulsion Laboratory, the University of Delaware and the University of Arizona. 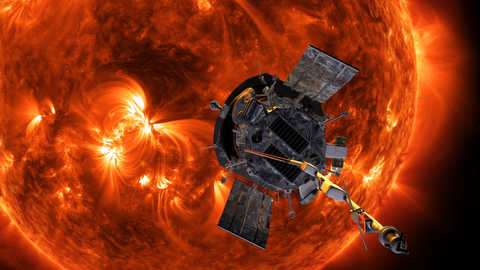