Sept. 18, 2019 — No one knows for certain when Saturn’s iconic rings formed, but a new study co-authored by a Southwest Research Institute scientist suggests that they are much older than some scientists think.

The study takes a closer look at 2017 Cassini spacecraft data that inspired several research papers suggesting that the rings were formed around the time dinosaurs roamed the Earth. Those studies, published in 2018 and 2019, challenged long-held models that put the formation of the rings several billion years earlier, around the time Saturn formed with the rest of the solar system.

In a new twist, SwRI scientist Luke Dones and three other researchers argue that the historic models probably had it right in the first place. The age debate centers around Cassini data from 2017, when the craft revealed a trove of data with dazzling images of Saturn’s rings, which are composed of clear, almost pure water ice.

“After Cassini’s mission ended, there was a small flood of research that claimed the rings were much younger than we had considered them to be. A common argument was that the rings, if much older, would have become much more polluted as a result of meteoroids crashing into them,” Dones said.

A series of studies suggested that the rings would have absorbed portions of dark, dusty material from the meteoroids and gradually become darker. Therefore, the rings would be too bright and clean to have existed in the solar system for billions of years.

Dones and his collaborators, Aurélien Crida of the Université Côte d’Azur, Sébastien Charnoz of the Institut de Physique du Globe de Paris, and Hsiang-Wen Hsu of the University of Colorado, Boulder, pointed out Cassini measurements that show the rings are constantly losing matter to Saturn. The process, which is largely a mystery, could very well be “cleaning” the ice of the rings and making them brighter over time.

Dones and his collaborators state that one of the clearest indications that the rings are old is that their mass is consistent with researchers’ current understanding of how primordial rings change. Rings spread with time, spawning satellites at their outer edge and losing mass to Saturn at their inner edge. More massive rings spread faster, so even a very massive primordial ring would be expected to now have the present mass of the rings. If the rings are young, then their current mass would have to be a coincidence.

“It’s not impossible to determine the age of the rings, but to do so we’ll need a future mission to Saturn that spends a long, intense period studying the rings themselves as well as the relationship between them and the gas giant,” Dones said. 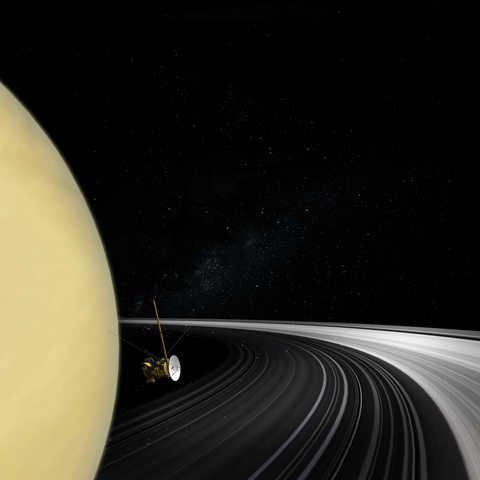