“I am honored to accept this award on behalf of the entire Juno team,” said Bolton, a theoretical and experimental space physicist and associate vice president of SwRI’s Space Science and Engineering Division. “It’s really a gigantic team that made it happen with many organizations and institutions across the country and around the world contributing. We’re very honored to be recognized by such a great organization.”

Bolton is the principal investigator of NASA’s Juno mission to Jupiter, which launched in 2011. The Juno spacecraft entered Jupiter orbit in 2016, making discoveries that have since rewritten the textbooks about the gas giant. Juno’s extended mission begins in August, to address fundamental questions that arose during Juno’s prime mission while reaching beyond the planet to explore Jupiter’s ring system and its largest moons.

Prior to Juno, Bolton served on both the Galileo and Cassini missions to the outer planets. His research has focused on modeling the radiation environments of Jupiter and Saturn, the atmospheric and core structures of those planets, and the formation and evolution of the solar system. In addition to his work as a scientist, Bolton has collaborated with many artists to bring visual and musical interpretations of the outer solar system to a wide audience. He has consulted and appeared in numerous documentaries and strives to bring STEM outreach to students around the world. For his wide-ranging work, Bolton received the Jet Propulsion Laboratory’s Individual Award for Exceptional Excellence in Leadership in 2002, 2001 and 1996, as well as the Excellence in Management award in 2000. He has also received over 20 NASA Group Achievement Awards.

Bolton has more than 30 years of experience in aerospace and space science, with expertise ranging from mission design and engineering to scientific research and program management. He was a principal scientist at NASA’s Jet Propulsion Laboratory for 25 years prior to joining the SwRI staff in 2004. He holds a bachelor’s degree in aerospace engineering from the University of Michigan and master’s and doctorate degrees in astronomy and astrophysics from the University of California, Berkeley.

Bolton also served as a keynote speaker at the 2021 NSS International Space Development Conference, held virtually this year. NSS is an independent nonprofit nonpartisan educational membership organization dedicated to the creation of a spacefaring civilization, with a vision of people living and working in thriving communities beyond the Earth and using the vast resources of space for the betterment of humanity. The annual Space Pioneer awards recognize those who have made significant contributions in different fields of endeavor to “develop a spacefaring civilization that will establish communities beyond the Earth.” 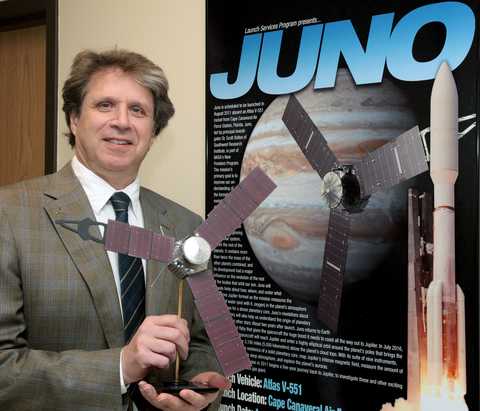