November 15, 2018 — Analyzing data from NASA’s Magnetospheric Multiscale (MMS) mission, a team led by Southwest Research Institute (SwRI) has found that the small regions in the Earth’s magnetosphere that energize the polar aurora are remarkably calm and nonturbulent. The new observations, which also revealed intense electron jets associated with the regions where magnetic reconnection occurs, were outlined in a paper published in Science Nov. 15.

“On the sunward side, explosive magnetic reconnection events dump energy into Earth’s magnetosphere, the region surrounding the Earth dominated by its magnetic field,” said the paper’s lead author, Dr. Roy Torbert, the heliophysics program director at SwRI’s Department of Earth, Oceans and Space at the University of New Hampshire, Durham. “Reconnection on the night side is dumping energy into Earth’s atmosphere, as electrons travel down magnetic field lines and excite aurora. The more we understand about these processes, the better we can understand and model how ‘space weather’ could affect the technology we depend on.”

Magnetic reconnection — which occurs in both natural plasma environments such as those in space and in laboratory fusion experiments — is at the heart of space weather. Reconnection is responsible for explosive solar events, such as solar flares and coronal mass ejections, and drives disturbances in Earth’s space environment. Such disturbances not only produce spectacular auroras, but also the high-energy electromagnetic radiation they send toward Earth can shut down electrical power grids and disrupt satellite-based communication and navigation systems.

NASA’s four Magnetospheric Multiscale (MMS) satellites have spent the last three years studying magnetic reconnection in the near-Earth environment. For the first half of the mission, the satellites studied reconnection that occurs in the sunward side of Earth where the solar wind — the constant flow of charged particles from the Sun — pushes into Earth’s magnetic field. The two sides connecting have different densities, which cause magnetic reconnection to occur asymmetrically, spewing electrons away at supersonic speeds. In the magnetotail, the trailing portion of the magnetosphere blown back by the solar wind, only the Earth’s field lines are colliding, so the particles are accelerated nearly symmetrically.

“For the first time, we have observed the details of the energy dissipation regions where symmetric reconnection occurs,” Torbert said. “We measured the aspect ratio of these remarkably small regions, just a few hundred kilometers in size. We’re beginning to understand the efficiency of energy release and how it connects in our environment.”

The unprecedented resolution and accuracy of the MMS measurements revealed these events last only a few seconds, producing extremely high velocity electron jets — over 15,000 kilometers per second  and intense electric fields and electron velocity distributions.

“The process appears to be very efficient,” Torbert said. “Any turbulence is not strong enough to disturb discrete features of the electron velocity distributions created in the electromagnetic fields around the energy dissipation region.”

These discoveries — which have significant implications for space and solar physics, astrophysics and fundamental plasma physics — were published Nov. 15 in Science [doi: 10.1126/science.aat2998 (2018)].

MMS is the fourth NASA Solar Terrestrial Probes Program mission. Goddard Space Flight Center built, integrated and tested the four MMS spacecraft and is responsible for overall mission management and mission operations. The principal investigator for the MMS instrument suite science team is based at SwRI in San Antonio, Texas. Science operations planning and instrument commanding are performed at the MMS Science Operations Center at the University of Colorado’s Laboratory for Atmospheric and Space Physics in Boulder. 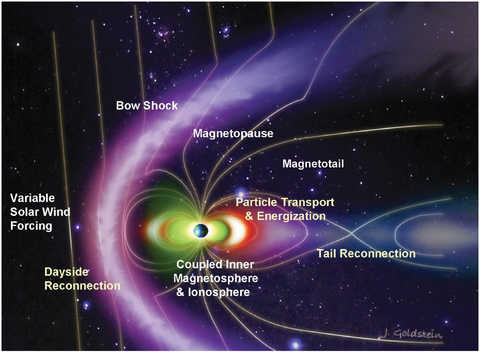 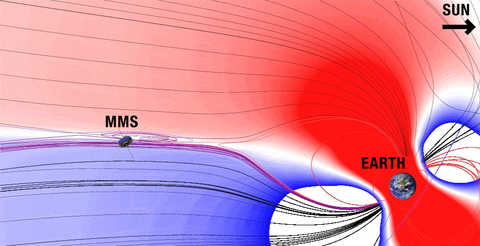