January 17, 2019 — Using images and thermal data collected by NASA’s Lunar Reconnaissance Orbiter (LRO), Southwest Research Institute scientists and their collaborators have calculated the ages of large lunar craters across the Moon to be less than 1 billion years. By comparing the impact history of the Moon with Earth’s craters over this interval, they discovered that the rate of sizable asteroid collisions has increased by a factor of two to three on both bodies over the last 290 million years.

For decades, scientists have tried to understand the rate that asteroids hit the Earth by carefully studying impact craters and by using radiometric dating of the rocks around them. Earth has fewer older craters than expected compared to other bodies in the solar system, making it difficult to find an accurate impact rate and to determine if it has changed over time. Many experts assumed that the earliest Earth craters may have been worn away by wind, storms and geologic processes, mechanisms not present on the Moon.

“What this research uncovered is that the Earth has fewer older craters on stable terrains not because of erosion, but because the impact rate was lower prior to 290 million years ago,” said SwRI’s William Bottke, an asteroid expert who coauthored a paper outlining the research published January 18 in the journal Science. “The Moon is like a time capsule, helping us understand the Earth. We found that the Moon shared a similar bombardment history, which meant the answer to Earth’s impact rate was staring everyone right in the face.”

Though large impacts are rare, the Earth and the Moon are hit in the same proportions over time. Lunar craters experience little erosion over billions of years, but scientists could not pinpoint their ages until the Lunar Reconnaissance Orbiter (LRO) started circling the Moon a decade ago, studying its surface.

LRO’s thermal radiometer, called Diviner, measures the heat radiating off the Moon’s surface. By looking at these data during the lunar night, scientists measured how much of the surface is covered by large, warm rocks, versus cooler, fine-grained lunar soil. Large impact craters formed in the last billion years are littered with boulders and rocks, while older craters are smoother. Using a relatively new technique to calculate how long it takes to reduce lunar stones into soil, the paper’s first author Sara Mazrouei and coauthor Rebecca Ghent at the University of Toronto calculated the ages of all lunar craters to be younger than about a billion years.

The work paid off, returning several unexpected findings. First, the team discovered that the rate of large crater formation on the Moon was about two to three times higher over the last 290 million years than over the previous 700 million years. The reason for this jump in the impact rate is unknown. It might be related to large collisions taking place more than 300 million years ago in the main asteroid belt between the orbits of Mars and Jupiter. Such events can create debris that ultimately penetrates the inner solar system.

The second surprise came from comparing the ages of large craters on the Moon to those on Earth. Their similar size and age distributions challenge the theory that Earth had lost so many craters through erosion on stable terrains back to 650 million years ago.

Scientists confirmed this deduction by studying kimberlite pipes — long-extinct volcanoes that stretch, in a carrot shape, a couple of kilometers below the surface. Scientists know a lot about the ages and rate of erosion of kimberlite pipes because they are widely mined for diamonds. They also are located on some of the least eroded regions of the Earth, the same places where we find preserved impact craters. Tom Gernon, a coauthor and earth scientist based at the University of Southampton in England, showed that kimberlite pipes formed in the last 650 million years on stable terrains had not experienced much erosion, indicating that the large impact craters younger than this in the same regions must also be intact. “So that’s how we know those craters represent a near-complete record,” Ghent said.

“We can now apply this technique to study the surfaces of other planets to find out if they might also show more impacts,” Bottke said. “Our findings also have implications for the history of life, which is punctuated by extinction events and rapid evolution of new species. Though the forces driving these events are complicated, asteroid impacts have surely played a role in this ongoing saga.”

The research for the paper, titled “Earth and Moon impact flux increased at the end of the Paleozoic,” was funded in part by NASA’s Solar System Exploration Research Virtual Institute (SSERVI). SwRI researchers serve on 13 teams within SSERVI, which is based and managed at NASA’s Ames Research Center in California’s Silicon Valley. SSERVI is funded by the Science Mission Directorate and Human Exploration and Operations Mission Directorate at NASA Headquarters in Washington, D.C. For more about SSERVI, visit sservi.nasa.gov.

For an animation illustrating this research, see https://youtu.be/ANYxkwvb8pc. 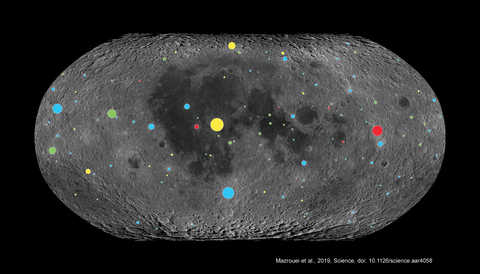 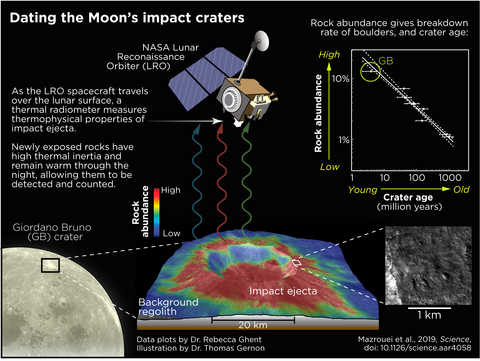