With a 130-foot antenna, MARSIS flies over the planet, bouncing radio waves over a selected area and then receiving and analyzing the echoes or reflections. Any near-surface liquid water should send a strong bright signal, whereas the radar signal for ice and rock would be much smaller.

Because conventional models assume the Mars south polar cap experiences temperatures much lower than the melting point of water, many scientists have questioned the presence of liquid water. Clay, hydrated salts and saline ices have been proposed as potential explanations for the source of the bright basal reflections. The Italian-led team investigating the proposed phenomena used previously published data, simulations and new laboratory measurements.

“Lakes of liquid water actually exist beneath glaciers in Arctic and Antarctic regions, so we have Earth analogs for finding liquid water below ice,” said Stillman, a specialist in detecting water in any format — liquid, ice or absorbed — on planetary bodies and co-author of a paper describing these findings. “The exotic salts that we know exist on Mars have amazing ‘antifreeze’ properties allowing brines to remain liquid down to -103 degrees Fahrenheit. We studied these salts in our lab to understand how they would respond to radar.”

Stillman has over a decade of experience measuring the properties of materials at cold temperatures to detect and characterize subsurface ice, unfrozen water and the potential for life throughout the solar system. For this project, Stillman measured the properties of perchlorate brines in an SwRI environmental chamber that produces near-liquid-nitrogen temperatures at Mars-like pressures.

“My Italian colleagues reached out to see if my laboratory experiment data would support the presence of liquid water beneath the Martian ice cap,” Stillman said. “The research showed that we don’t have to have lakes of perchlorate and chloride brines, but that these brines could exist between the grains of ice or sediments and are enough to exhibit a strong dielectric response. This is similar to how seawater saturates grains of sand at the shoreline or how flavoring permeates a slushie, but at -103 degrees Fahrenheit below a mile of ice near the South Pole of Mars.”

The search for water in the cosmos is rooted in searching for potential habitability, because all known life requires water.

“In this case ‘following the water’ has led us to place so cold that life as we know it couldn’t flourish,” Stillman said. “But it’s still interesting, and who knows what evolutionary paths extraterrestrial life may have taken?”

The lead authors for an Earth and Planetary Sciences Letters paper describing this research are from Roma Tre University in Rome, Italy. It can be accessed online at ScienceDirect https://doi.org/10.1016/j.epsl.2022.117370. 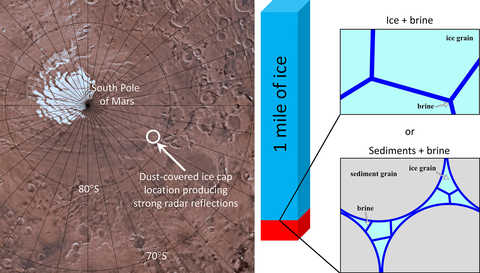