So where does all this nitrogen come from? Dr. Kelsi Singer, a postdoctoral researcher at Southwest Research Institute, and her mentor Dr. Alan Stern, SwRI associate vice president and the science lead for the New Horizons mission, outlined likely sources in a paper titled, “On the Provenance of Pluto’s Nitrogen.” The Astrophysical Journal Letters accepted the paper for publication on July 15, just a day after the spacecraft’s closest encounter with the icy dwarf planet (ApJ, 808, L50).

“More nitrogen has to come from somewhere to resupply both the nitrogen ice that is moving around Pluto’s surface in seasonal cycles, and the nitrogen that is escaping off the top of the atmosphere as the result of heating by ultraviolet light from the Sun,” said Singer. They looked at a number of different ways that nitrogen might be resupplied.

Singer and Stern wondered if comets could deliver enough nitrogen to Pluto’s surface to resupply what is escaping its atmosphere. They also looked at whether craters made by the comets hitting the surface could excavate enough nitrogen – but that would require a very deep layer of nitrogen ice at the surface, which is not proven. The team also studied whether craters could expose more surface area, by punching through surface deposits that would likely be built up over time.

“We found that all of these effects, which are the major ones from cratering, do not seem to supply enough nitrogen to supply the escaping atmosphere over time,” continued Singer. “While it’s possible that the escape rate was not as high in the past as it is now, we think geologic activity is helping out by bringing nitrogen up from Pluto’s interior.”

And while the data weren’t in before this paper was written, the newest images of Pluto show land forms that suggest heat is rising beneath the surface, with troughs of dark matter either collecting, or bubbling up, between flat segments of crust, which could be related.

“Our pre-flyby prediction, made when we submitted the paper, is that it’s most likely that Pluto is actively resupplying nitrogen from its interior to its surface, possibly meaning the presence of ongoing geysers or cryovolcanism,” said Stern. “As data from New Horizons comes in, we will be very interested to see if this proves true.” 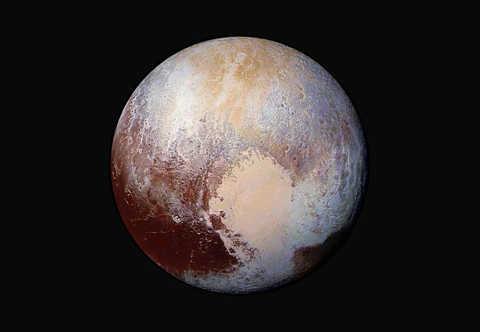