Bridge fires are considered to be low-probability but high consequence events. However, because of recent fire incidents, the poor state of an increasing number of bridges throughout the country, rapid growth of ground transportation, and increasing transportation of hazardous materials, fire safety for concrete bridges has become a major concern. When concrete is exposed to elevated temperatures from fire, in addition to conduction and convection of heat, the phase changes in concrete caused by evaporation-condensation, adsorption-desorption, and hydration-dehydration processes result in a strongly coupled heat and mass transfer problem. In addition to deteriorating the strength and stiffness of the structural material under intense heat, the multiphase process involving thermal, mechanical, and liquid and vapor flow inside concrete results in spalling of concrete, causing severe damage or collapse of the structure. Because of the absence of bridge design codes and standards regarding fire safety, performance-based approaches for fire safety design of new bridges and assessment strategies for existing bridges are gaining importance. Consequently, research is needed to develop and evaluate advanced numerical models and design tools for the realistic prediction of structural responses in fire.

In this research, we are simulating the nonlinear system response of a 3D model of a prestressed concrete slab where the post-tensioning tendon and anchor are explicitly modeled. Heat from fire causes progressive spalling and deterioration of strength and stiffness of the concrete and the tendons, ultimately resulting in structural collapse. Consequently, several computational models are coupled and collectively advanced through the solution time. The main components of the fire simulation consist of exposure of the slab to the standard fire, a transient thermal analysis, a hydrothermal model, and a structural demand and capacity analysis. Thermal modeling determines the temperature distribution in the structural components used for hydrothermal and structural analysis. Hydrothermal modeling is used to simulate moisture desorption, evaporation, and migration and to estimate the pore pressure for fire-induced spalling calculations. Structural modeling evaluates the demand (stress and strain in concrete and prestressing tendons) to determine the response based on thermally induced material behavior at elevated temperatures. We are validating the methodology against well instrumented previously conducted fire experiments reported in the literature.

This research is ongoing. We are advancing our methodology and validation process in stages. We simulated a 3D thermal-mechanical response of a concrete beam for validation. The beam was prestressed by a parabolic-shaped unbonded tendon. We are developing the hydrothermal modeling algorithm. Results from preliminary analyses are shown in Figure 1. Based on the results obtained so far, an abstract of a paper entitled “Development of a Simulation Approach for Fire and Structure Interaction of Concrete Highway Bridge” was prepared and accepted for presentation at the ASTM E05 Fire Standards Symposium on Advancements in Evaluating the Fire Resistance of Structures held December 6–7, 2018, in Washington, D.C. Presenting authors were invited to submit the full paper for publication in the peer-reviewed journal Fire and Materials. 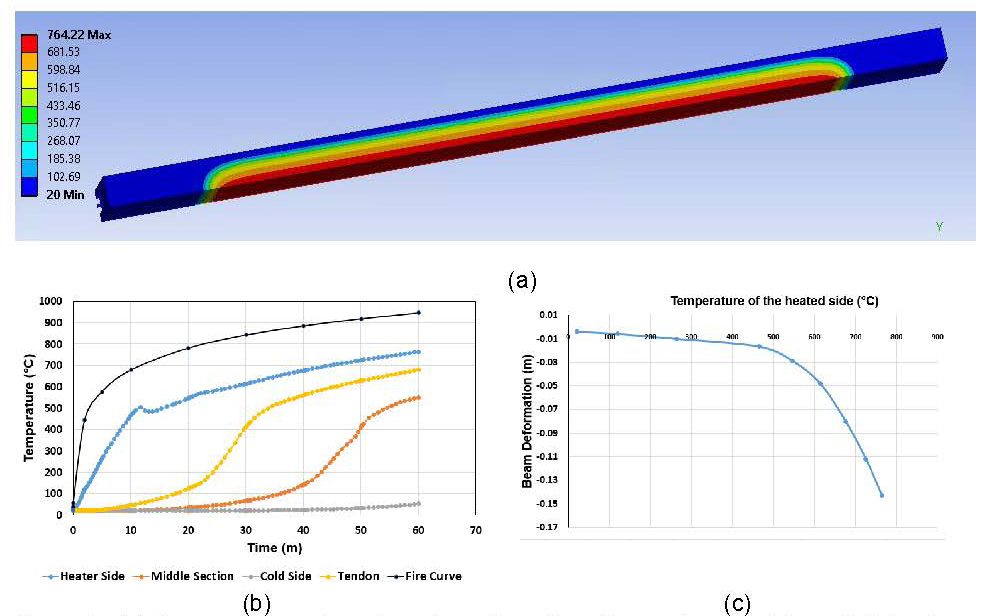