March 3, 2020 — Southwest Research Institute (SwRI) conducted room burn comparisons to better understand how country-specific fire codes in the U.S., France and the United Kingdom affect the fire safety of home furnishings and their contributions to flashover. Reducing the rate for flashover in a room burn can significantly save lives translating to more time for people to escape a fire. Flashover occurs when temperatures at the ceiling reach 1,100 degrees C and all the combustibles in the room ignite.

The study found the American and French-furnished rooms reached flashover in just five to six minutes whereas the United Kingdom room took 22 minutes to reach flashover.

The upholstered furniture from the U.K. contained the most fire-retardant protection. The smoke toxicity measured was also recorded as less acutely toxic than the U.S. and French furnished rooms.

SwRI fire engineers conducted nine room burns to better understand the variances in fire standards from different countries and to study how quickly flashover occurs in a replicated realistic environment. Each of the three identically furnished sets of rooms contained a three-cushion couch, a chair and a flat panel television. However, for testing purposes, SwRI purchased these specific items from each respective country given that the materials and retardants vary. Each room set up also included an identical coffee table, end table, curtain, bookcase and books, which were all purchased in the U.S. Because these items are typically not treated with a fire retardant, the fire performance should not vary from country to country. The Institute conducted the room burn tests using the international standard for full-scale room test specifications, standard ISO 9705. The U.S. and France use a smolder only flammability standard while the U.K. combines a smolder and open flame ignition test to evaluate the flammability.

When the living room furnishings are the first item ignited in a fire, there tends to be a higher incident of death. SwRI selected three ignition sources that represent a passing standard used in the UK during a room burn with an open flame ignition. For each room configuration, ignition started in the center couch cushion.

“In the U.S. and other countries, there is a push to eliminate chemical flame retardants due to an anti-chemical movement,” Blais said. “When testing consumer products, one of the methods employed is to reduce the requirement to test consumer products, especially furniture, against open flame ignition sources. This study shows the impact of country fire codes only requiring smoldering ignition compared to a country testing with open flame ignition. When an open flame standard is applied to consumer products that have been treated with fire preventative material, the results show the room would reach flashover at a much slower rate allowing people five to six times the number of minutes to escape from a house fire when the first item ignited is a couch.”

Blais was the lead author of the paper. Karen Carpenter, assistant director of Fire Technology, and Kyle Fernandez, a fire technology engineer, also collaborated on the study and paper.

The paper published in Fire Technology journal is titled “Comparative Room Burn Study of Furnished Rooms from the United Kingdom, France and the United States.” Fire Technology is a peer-reviewed journal publishing research about fire hazards and safety. The North American Fire Retardant Association and the American Chemistry Council funded the research. SwRI, based in San Antonio, has one of the world’s largest organizations dedicated to fire research and testing. The article is distributed under the terms of the Creative Commons Attribution license allowing users to read, copy, reference and distribute as long as the work is cited. It can be downloaded from Springer (DOI 10.1007/s10694-019-00888-8) and is available in the March 2020 print edition (ISSN: 0015-2684), pages 489-514.

To see a video about this fire study, visit: https://youtu.be/wlnAAxOKYLg. 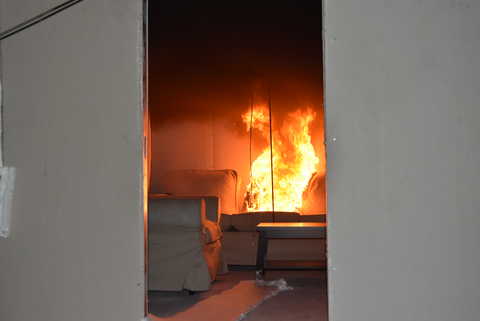