December 11, 2019 — SwRI has received an additional $500,000 in NASA funding to evaluate a device designed to deliver liquid propellant to a rocket engine from fuel tanks. The tapered liquid acquisition device (LAD) is designed to prevent potentially dangerous vapor bubbles from being transferred to the rocket engine. Developed by SwRI engineers and NASA’s Glenn Research Center in Ohio, the new design was tested in a suborbital flight aboard Blue Origin’s New Shepard vehicle on December 11. Additional NASA funding will cover two further launch evaluations.

Since the Apollo missions, most rocket engines have used cryogenic liquid propellants as fuel. Cryogenic rocket engines are highly efficient and require fuel stored at low temperatures. With increasing discussion of the future of human space exploration, especially beyond Earth’s orbit, comes a need for more innovation in fuel storage under microgravity conditions.

“On a long space mission, large amounts of fuel will need to be stored at low temperatures and then transferred to the rocket engine as needed,” said Kevin Supak, a senior research engineer at SwRI and the project’s principal investigator. “Current LADs have straight channels that cannot manage internal vapor bubbles.”

Through propellant boil-off, vapor bubbles can hinder liquid propellant from transferring to other tanks or damage rocket engines during ignition. Supak, along with SwRI engineers Dr. Amy McCleney and Steve Green, created a LAD with a tapered channel that passively removes the bubbles through surface tension. The idea originated with a joint research effort between SwRI and NASA in the late 1990s and early 2000s to develop cryogenic fluid management capabilities. The current flight test project is funded by NASA’s Space Technology Mission Directorate through the Flight Opportunities program, which is managed at NASA Armstrong Flight Research Center in California.

“The tapered channel is a relatively small modification to a LAD that is commonly used but it offers a significant potential improvement in mitigating vapor ingestion,” Supak said.

Supak and his colleagues have already tested the device successfully on the ground, and on December 11 tested it in space with Blue Origin’s New Shephard suborbital rocket, which takes off and lands vertically. The 10-minute flight is ideal for the experiment, providing roughly three minutes of high-quality microgravity, which is significantly more than the 25 seconds of microgravity achieved in parabolic flights.

“We created a test apparatus with multiple tapered channels filled with liquid and a vapor bubble,” he said. “A camera will record the vapor bubble migration across the channel in the microgravity environment.”

New Shephard launched from Blue Origin’s test site near Van Horn, Texas, with the LAD test apparatus aboard on December 11. SwRI researchers will be present to oversee the preparation of the experiment and witness the launch.

The second and third launches will focus on larger versions of the LAD more similar in size and using realistic material to the one used for an actual cryogenic tank. SwRI will begin building the larger versions in November, with plans for them to travel to space aboard New Shepard. 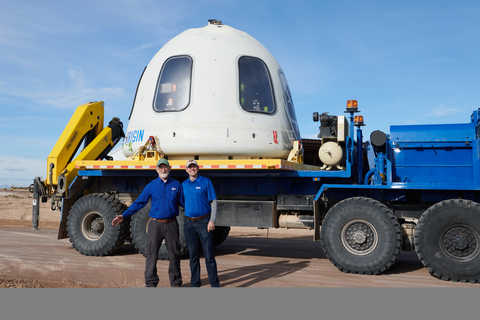