April 7, 2020 — NASA has selected Southwest Research Institute and the University of New Hampshire to continue developing a mission to look for evidence of distant energetic events, such as the birth of black holes. NASA’s Small Explorers Program (SMEX) selected the “LargE Area burst Polarimeter” (LEAP) program for a mission concept study.

Mounted on the outside of the International Space Station, LEAP would study energetic jets such as those erupting from the explosive death of a massive star or the merger of compact objects such as neutron stars. LEAP’s ability to measure the polarization of gamma-ray bursts (GRB) could resolve competing theories about the nature of the jets. LEAP would complement NASA’s Imaging X-ray Polarimetry Explorer (IXPE), scheduled to launch in 2021, which will study lower-energy X-ray phenomena.

“Gamma rays are the smoking gun for some of the most energetic events in the universe,” said Mark McConnell, director of SwRI’s Earth, Oceans and Space (SwRI-EOS) Department at UNH’s Durham, New Hampshire, campus. “When a very massive star explodes in a supernova and then collapses into a black hole, it ejects jets with energies that can exceed anything observed in the universe since the Big Bang. LEAP will measure the resulting GRB with previously unachievable precision.”

LEAP will improve our understanding of the role that magnetic fields play in these systems, especially with regard to the formation and sustainment of the high-speed jets that are responsible for what we see. It should also reveal how the observed gamma radiation is produced within the jet.

“Measuring the polarization of the GRB radiation could answer several open questions about the jet physics and the underlying processes that produce the jets,” McConnell said.

LEAP is a single instrument with nine polarimeter modules based on well-established, flight-proven technologies. It will measure gamma-ray burst polarization while self-sufficiently providing the source localization required to analyze polarization data. These data will allow LEAP to differentiate between classes of GRB models. Detailed time-resolved and/or energy-resolved studies will be conducted for the brightest GRBs.

“While LEAP promises to advance our understanding of gamma-ray bursts and high-energy astrophysics,” McConnell said, “it could also help inform studies of gravitational radiation, which was first observed from merging black holes in 2016.” 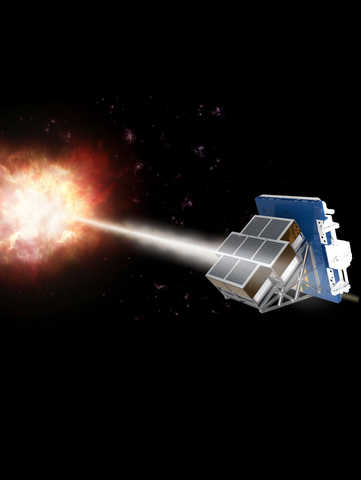