March 10, 2015 — On March 12, NASA’s Magnetospheric Multiscale (MMS) spacecraft are scheduled to launch aboard an Atlas V rocket to begin a two-year investigation of one of the most basic and important physical processes in the universe — magnetic reconnection. The mission will fly four identical spacecraft in a pyramid formation, using the Earth’s magnetosphere as a laboratory to study how the Sun’s magnetic field merges with the Earth’s magnetic field, explosively converting magnetic energy into heat and kinetic energy.

“With MMS, we will have the first chance to watch magnetic reconnection from the inside, right as it’s occurring,” said Dr. Jim Burch, vice president of Southwest Research Institute’s Space Science and Engineering Division and principal investigator of MMS.

Magnetic reconnection produces many intense phenomena, from solar flares to auroras to high-energy cosmic rays to X-ray emissions. It is the ultimate driver of “space weather,” which impacts technologies such as communications, navigation, and power grids, as well as astronaut health and safety.

“This research is also important for nuclear fusion research, where magnetic reconnection has proven to be a serious obstacle to tapping this potential energy source,” said Burch. The MMS spacecraft include 100 instruments, 25 on each unit. “These reconnection sites are so thin that MMS will fly through them in under a second, but the MMS sensors have been built to be fast, making measurements as much as a 100 times faster than previously possible.”

SwRI provided the hot plasma composition analyzers (HPCA) on the four spacecraft. HPCA studies the variable fraction of oxygen ions found in the plasmas in Earth’s magnetosphere. The instrument also measures the density, velocity, and temperature of all ion species in the plasma with unprecedented accuracy while requiring minimal mass and power. In addition, each spacecraft carries an SwRI-built central instrument data processing unit, which forms the interface between the entire instrument suite and the spacecraft’s command and data handling system.

MMS is the fourth NASA Solar Terrestrial Probes Program mission. Goddard Space Flight Center built, integrated, and tested the four MMS spacecraft and is responsible for overall mission management and mission operations. The principal investigator for the MMS instrument suite science team is based at SwRI in San Antonio, Texas. Science operations planning and instrument commanding are performed at the MMS Science Operations Center at the University of Colorado’s Laboratory for Atmospheric and Space Physics in Boulder.

A video is available at: http://youtu.be/xWqLhv77iIw. 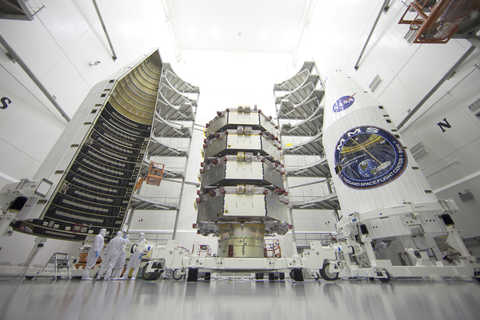