May 27, 2020 — NASA has awarded Southwest Research Institute $3 million to develop a lunar version of its Laser Absorption Spectrometer for Volatiles and Evolved Gas (LASVEGAS) instrument. This spectrometer can precisely measure the volatile compounds present in planetary atmospheres and surfaces — critical information for space science and exploration.

“LASVEGAS is about half the size of a paper towel roll. It’s extremely compact, low mass, low volume and low power — all important characteristics for spaceflight,” said SwRI’s Dr. Scot Rafkin, principal investigator of the instrument. “It can be deployed on the smallest of rovers or landers as well as carried in a single hand by an astronaut sauntering across the lunar surface in search of water ice, methane and other useful resources.”

The instrument measures gases from planetary atmospheres such as Mars to understand their composition. It can also heat a sample of a planetary surface such as the icy surface of Jupiter’s moon Europa or from lunar soil to determine the composition of released gases.

NASA’s Maturation of Instruments for Solar System Exploration (MatISSE) program provided $3M in 2019 to develop the LASVEGAS instrument for application to Europa and similar icy worlds. In 2020, SwRI received an additional $3 million from the agency’s Development and Advancement of Lunar Instrumentation (DALI) program to adapt the design to operate on the Moon’s surface.

“Spectrometry is one of the key analytical tools used in space exploration,” Rafkin said. “LASVEGAS heats a thimble-sized sample from a planetary surface to release water and other volatile gases like methane.”

The gas flows into a small, cylindrical chamber where laser light of different wavelengths is bounced back and forth between mirrors on each end. As the light passes repeatedly through the gas in the sample, the different molecular species in the gas absorb the light differently depending on the wavelength. Then the laser light is directed onto a detector that measures its intensity to determine the abundance of the volatile compounds. Each molecular species in the gas has a distinct “fingerprint” of absorption, revealing its overall abundance.

“The instrument is yet to be selected for flight on a mission, but the work funded under the MatISSE and DALI programs will allow the instrument to be credibly proposed for a variety of future opportunities, especially those related to the return of humans to the surface of the Moon,” Rafkin said. 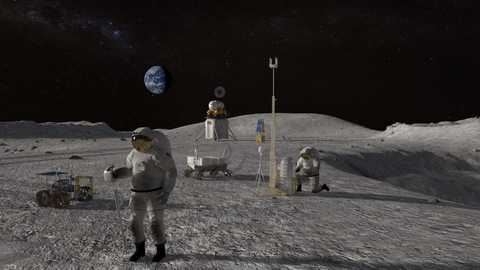