July 25, 2011 — Southwest Research Institute®(SwRI®) announced in February that it had contracted multiple suborbital flights for its own astronaut payload specialists as part of a larger effort to promote the development of commercial human spaceflight. Preparations for these flights are proceeding and will be flown on a combination SwRI manifest of XCOR Lynx I and Virgin Galactic SpaceShip2 vehicles. The Lynx I missions will reach altitudes of about 200,000 feet; the SpaceShip 2 missions will reach altitudes near 350,000 feet.

Payload specialist training and experiment preparations are proceeding on schedule. The three payload specialists have passed the required FAA flight physicals and completed basic centrifuge and zero-G training. In addition to the initial physical requirements, the three experiment payloads designed to test the ability of suborbital vehicles for scientific applications are now complete.

As the project reaches this milestone, the SwRI flight team also has released its project mission patch, which will be worn on all flights.

"This patch symbolizes both suborbital parabolic flight with its stylized blue arch trajectory, and the manned nature of the flights with the constellation Orion," says Stern, associate vice president of the SwRI Space Science and Engineering Division. "SwRI's logo, which has existed for decades and includes the Earth, is also depicted below the suborbital trajectory, as is the American flag, which symbolizes the uniquely American nature of the next-generation suborbital industry."

"This is as exciting as it gets! We're going to be pioneering how to do research using scientists on suborbital spacecraft for the first time," remarked Olkin, an SwRI principal scientist. 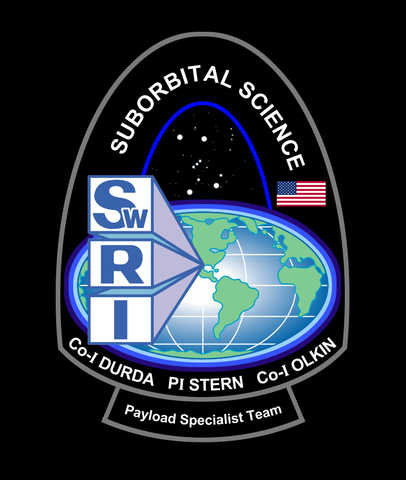