Oct. 9, 2007 — During the first traversal nearly straight down any planet's magnetotail, the Solar Wind Around Pluto (SWAP) instrument aboard New Horizons gathered remarkable new data on the magnetospheric bubble that surrounds Jupiter. The encounter, a bonus science mission for the Pluto-bound spacecraft, occurred as it rounded the planet in February 2007 for a gravity assist to help speed its journey to the edge of the solar system.

During the flyby, SWAP measured plasma populations inside the planet's magnetosphere on an orbit that has never been traveled before. That orbit carried the spacecraft from the planet back a hundred million miles deep into the magnetotail, the portion of the magnetosphere dragged away from the Sun by the flow of the million mile-per-hour solar wind. Previous examinations of Jupiter's magnetotail were limited to measurements very close to the planet and few very brief encounters at even greater distances.

"This was an absolutely fabulous trajectory for doing new science; the spacecraft went almost straight down the middle of the largest cohesive structure in the solar system," says Dr. David J. McComas, SWAP principal investigator and senior executive director of the Space Science and Engineering Division at Southwest Research Institute® (SwRI®). "We could actually see the structure of the magnetotail and watch its evolution with distance for the first time."

Observations, to be published in the Oct. 12 issue of Science, revealed an extremely complicated structure in the magnetotail with large blobs, or plasmoids, of magnetically influenced plasma drifting down the tail at a relatively slow rate of speed. As the distance from the planet increased, the magnetotail became more highly structured with gradual variations in the plasma and sharp boundaries (discontinuities) between plasma regimes.

SWAP gathered data from solar wind observations upstream of Jupiter, through the closest approach encounter, and back to about 2,500 Jovian radii (about 100 million miles) at the boundary of the magnetotail, called the magnetopause. Data shows that the inner magnetotail contains very hot ions — hotter than the top of SWAP's 7.5-kilovolt energy per charge range — that evolved to cooler and slower flows down the tail, beginning at about 100 Jovian radii; these flows were highly variable in flux and energy.

SWAP observations also revealed an unexpected component in the material flowing away from Jupiter. In addition to the volcanic material released from Io and material entering the magnetotail from the solar wind, the team found intense bursts of ionospheric hydrogen and H3+, which could only be coming from Jupiter's atmosphere.

"It's clear there's significant escape of material from the planet because the brightest burst we see turns out to be material that's largely from Jupiter, not from the solar wind or Io," says McComas.

New Horizons' encounter with Jupiter also raised some new questions. "In addition to seeing flows move down the magnetotail, we saw them sometimes move across it," says McComas. "Because Jupiter has the largest and most powerful magnetosphere in the solar system, everything we can learn about this and other mysteries could have implications for the other planets." Additional questions center on the unexpected variability of the energy and speed of the plasma flows, as well as the multi-day periodicities that were consistent with plasmoids expanding as they move down the tail.

Following New Horizons' arrival at Pluto in 2015, SWAP's primary mission will be to measure particles from the solar wind near the planet to determine whether it has an atmosphere and how fast that atmosphere might be escaping. 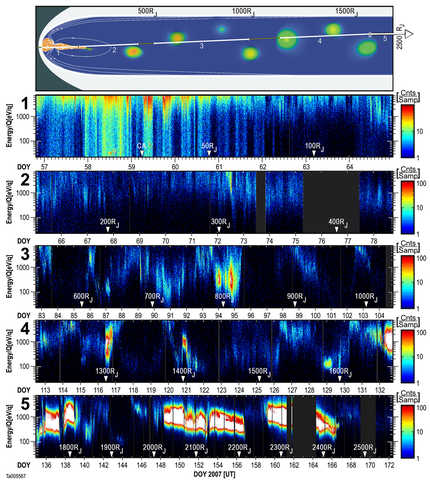