San Antonio — July 12, 2016 — Dr. John Spencer, an Institute scientist at Southwest Research Institute (SwRI), is receiving the 2016 Planetary Sciences Section Whipple Award from the American Geophysical Union (AGU). The award, named for comet astronomer Fred Whipple, recognizes individuals who have made outstanding contributions in the field of planetary science. Spencer will receive the award and present the Whipple Lecture at the 2016 AGU Fall Meeting in San Francisco in December.

“John has revolutionized the study of moons in the outer solar system by deciphering what spacecraft observations tell us about how these fascinating objects formed and evolved,” said Dr. Robin Canup, an associate vice president in SwRI’s Space Science and Engineering Division. “Using data from the Cassini mission, he was the first to recognize that excess energy is radiating from the south polar region of Saturn’s moon Enceladus, a key piece of evidence pointing towards the likely presence of an internal ocean. This monumental discovery has elevated Enceladus to a prime target for future NASA missions.”

Spencer is best known for his studies of moons of the outer planets using theoretical models, Earth-based telescopes, spacecraft observations, and the Hubble Space Telescope. He is a science team member on NASA’s New Horizons mission to Pluto, leading the search for Kuiper Belt targets beyond Pluto, and led the successful search for potential space debris to avoid on Pluto approach.

He serves on the science team for the Cassini Saturn orbiter and is helping develop NASAs Europa mission. His discoveries include finding oxygen on the surfaces of Europa, Ganymede, and Callisto, as well as identifying volcanic gas and large asymmetries in the atmosphere of Io. His theoretical work has improved our understanding of nitrogen frost on Pluto and Triton, water frost on Jupiter’s moons, heat radiation from asteroids, and helped solve the 300-year-old mystery of the bizarre black-and-white appearance of Saturn’s moon Iapetus.

“This year’s section and focus group awardees and named lecturers represent some of the brightest scientific minds in Earth and space sciences,” said Margaret Leinen, AGU president. “It is an incredible achievement to be selected and recognized from among their scientific peer groups and I congratulate Spencer on this honor and thank him for his contribution to society.”

Spencer is the author or co-author of more than 140 papers. A native of England, he obtained a bachelor’s degree in geology from the University of Cambridge in 1978 and a doctorate in planetary sciences from the University of Arizona in 1987. He spent four years in postdoctoral positions at the University of Hawaii before joining the staff of Lowell Observatory in Flagstaff, Ariz., in 1991. He worked there until he joined Southwest Research Institute in January 2004. 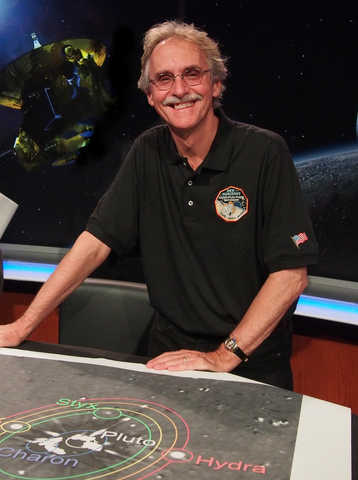