July 26, 2021 — Using spectral images from the Hubble Space Telescope (HST), a team of scientists led by Dr. Lorenz Roth of the KTH Royal Institute of Technology in Stockholm, Sweden, has determined that water vapor forms a large fraction of the atmosphere of Jupiter’s icy moon Ganymede. Southwest Research Institute scientists played a crucial role in this discovery, looking at the HST datasets and comparing them to the expected values of atmospheric emissions.

Ganymede’s atmosphere is produced by charged particle erosion and sublimation of its icy surface. Sublimation occurs when an ice changes directly into a gas without first turning into a liquid. Previous far-ultraviolet observations found both molecular oxygen (O2) and atomic oxygen (O) in the moon’s atmosphere but did not detect the water scientists had expected to find. The new observations find that H2O is more abundant than oxygen near the subsolar point, when the Sun is at its zenith, directly overhead, where the Sun's rays strike the planet most intensely.

“Sublimated water vapor at high noon on Ganymede, where the surface is relatively warm, is likely a key feature of the tenuous atmospheres of Jupiter’s icy moons,” said SwRI’s Dr. Kurt Retherford, a co-author of the Nature Astronomy paper describing this research. “As we prepare to launch NASA’s Ultraviolet Spectrograph (UVS) instrument, built and led by SwRI, aboard the European Space Agency’s (ESA’s) Jupiter Icy Moons Explorer (JUICE) mission next year, this new understanding of Ganymede’s atmosphere will let us better plan our observations and enhance our science return.”

Scientists expect that molecular oxygen is globally the most abundant constituent in Ganymede’s atmosphere, as it is gravitationally bound, stable and less likely to react with surface materials. The lighter products of the ice surface erosion, atomic hydrogen (H) and hydrogen gas (H2), escape quickly and are less abundant. Ganymede’s surface temperatures range from 80 Kelvin (-315 F) to perhaps as high as 150 K (-190 F), but water molecules only sublimate and fly off where it’s hotter than 110 K (-260 F) and get stuck frozen on colder surfaces, limiting the abundance of water elsewhere in the atmosphere. Atmospheric modeling suggests a dichotomy in the atmosphere between an H2O-dominated atmosphere near the warmer region where the Sun is overhead, and an O2-dominated atmosphere everywhere else.

“Showing that water vapor is a large fraction of the atmosphere of Ganymede — at least where the Sun is high — is a very timely result,” said SwRI’s Dr. Randy Gladstone, another co-author. “NASA’s Juno spacecraft is currently making close-up observations of Ganymede, including the emissions observed by HST, and these new results will be used to plan future observations with JUICE, which is designed to orbit Ganymede in 2033.”

“It’s interesting to think of an atmosphere that has a very different composition on its dayside relative to its nightside, with completely different processes driving the production of gases at different locations,” said Dr. Philippa Molyneux, a third SwRI co-author. “Imagine if Earth’s atmosphere worked that way, and how life might have evolved to adapt to that changing environment.” 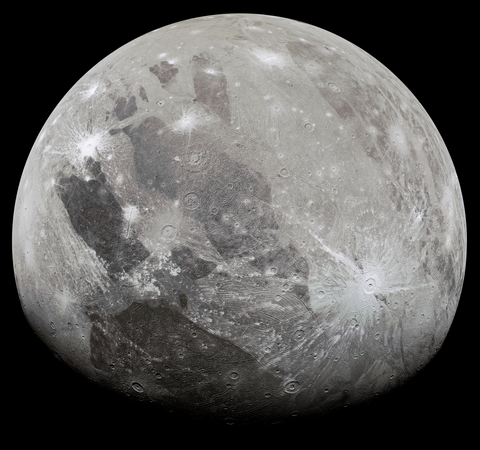