August 26, 2021 — A Southwest Research Institute (SwRI) experiment was performed aboard Blue Origin’s New Shepard suborbital rocket today, which launched from Van Horn, Texas. Five variations of the tapered liquid acquisition device (LAD), which is designed to safely deliver liquid propellant to a rocket engine from fuel tanks, were aboard the rocket to evaluate their performance in microgravity.

The tapered LAD was first developed in the late 1990s and early 2000s as part of a collaboration between SwRI and NASA to develop cryogenic fluid management capabilities during long spaceflights. Currently, most rocket engines use cryogenic liquid propellants as fuel. A long spaceflight would require large amounts of fuel to be stored at low temperatures and then transferred to the rocket engine, but current LADs have straight channels that are vulnerable to internal vapor bubbles.

“A more reliable design is needed to prevent vapor bubbles from transferring to other tanks as these bubbles could also damage the engines during ignition,” said Kevin Supak, a Program Manager at SwRI and the project’s principal investigator. “The tapered LAD is being developed to deliver vapor-free liquid to a fuel tank or an engine.”

Supak, along with SwRI engineers Dr. Amy McCleney and Steve Green, designed the LAD’s tapered channel, which passively removes the bubbles through surface tension. Today was the third time SwRI has tested the LAD aboard Blue Origin’s New Shepard rocket, which takes off and lands vertically. The 10-minute flight is ideal for the experiment, providing roughly three minutes of high-quality microgravity, which is significantly more than the 25 seconds of microgravity achieved in parabolic flights.

Today’s experiment saw Supak, McCleney and Green testing five different versions of the LAD to test if the angle or surface properties affects the ability of the devices to be able to passively remove gas bubbles in microgravity without costly thrusting maneuvers or active separation systems. A camera was installed inside the payload to record the behavior of vapor bubbles inside the five LADs.

“We’re testing the limits of the LAD, specifically how narrowing the angle will affect its ability to generate adequate bubble movement,” Supak said. “The narrower it is, the less driving force the bubble experiences for expelling it from the channel. The bubble will move slower in this experiment as compared to previous flights, but it will generate critical data for validating our model.”

The team also installed material on the side of one of the LADs that is rougher and more akin to the interiors of current non-tapered LADs, to test whether the coarser surface will affect the LAD’s reliability.

“This is our third experiment aboard New Shepard,” McCleney said. “We’re moving closer toward what we believe a tapered LAD inside an actual rocket would look like.”

New Shepard launched from Blue Origin’s Launch Site One near Van Horn, Texas, with the LAD test apparatus aboard on August 26. SwRI researchers were present to oversee the preparation of the experiment and witness the launch. The current flight test project is funded by NASA’s Space Technology Mission Directorate through the Flight Opportunities program, which is managed at NASA Armstrong Flight Research Center in California. 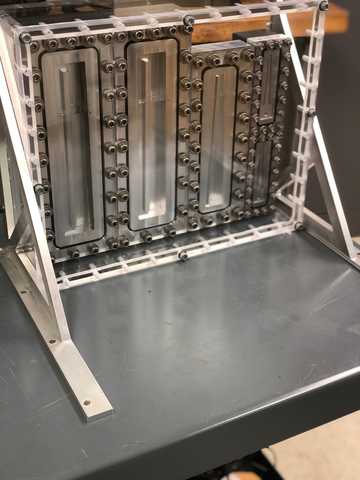