Unseen planet revealed by its gravity

San Antonio — May 10, 2012 — More than a 150 years ago, before Neptune was ever sighted in the night sky, French mathematician Urbain Le Verrier predicted the planet's existence based on small deviations in the motion of Uranus. In a paper published today in the journal Science online, a group of researchers led by Dr. David Nesvorny of Southwest Research Institute has inferred another unseen planet, this time orbiting a distant star, marking the first success of this technique outside the solar system.

Using a laborious computational method to assess the effects of gravity, known as gravitational perturbation theory, Le Verrier argued in favor of Neptune's existence and predicted the position of this hidden world to within an arc degree, as later detected directly by Johann Galle of the Berlin Observatory.

"Today's telescopes are detecting planets around distant stars, and NASA's Kepler Telescope, launched in 2009, is a champion among them," says Nesvorny. It finds planets by continuously monitoring the brightness of more than 150,000 stars, searching for brief periods of time, known as transits, when a star appears fainter because it is obscured by a planet passing in the foreground. But there's a twist.

"For a planet following a strictly Keplerian orbit around its host star, the spacing, timing and other properties of the observed transit light curve should be unchanging in time," said Dr. David Kipping of the Harvard-Smithsonian Center for Astrophysics and second author of the paper. "Several effects, however, can produce deviations from the Keplerian case so that the spacing of the transits is not strictly periodic."

A hidden planet, for example, can distort the sequence of transits if it gravitationally pulls on the transiting planet and delays some transits relative to others.

As part of the Hunt for the Exomoons with Kepler (HEK) project, the team analyzed recently released Kepler data and identified systems with transiting planets that show transit variations indicative of hidden companions, such as unseen moons or planets. The team identified the Sun-like star known as KOI-872 (KOI stands for Kepler Objects of Interest) as exceptional in that it shows transits with remarkable time variations over two hours.

"It quickly became apparent to us that a large hidden object must be pulling on the transiting planet," says Nesvorny. "To put this in context, if a bullet train arrives in a station two hours late, there must be a very good reason for that. The trick was to find what it is."

Using Le Verrier's perturbation theory to speed up time-consuming computer calculations of many possible configurations of planetary orbits, the HEK team showed that the observed variations can be best explained by an unseen planet about the mass of Saturn that orbits the host star every 57 days. According to the analysis, the planetary orbits are very nearly coplanar and circular, reminiscent of the orderly arrangement of orbits in our solar system.

The team's claim will be put to the test by Kepler's new observations, which will track dozens of new transits of KOI-872, comparing their timing to published predictions.

"Whilst the principal goal of the HEK project will continue to focus on searching for moons, this first planetary system discovered by HEK demonstrates the unexpected discoveries possible with transit analysis," said Kipping.

This research was funded by the National Science Foundation and NASA. The paper, "The Detection and Characterization of a Nontransiting Planet by Transit Timing Variations" by Nesvorny, Kipping, Lars Buchhave (Niels Bohr Institute), Gaspar Bakos (Princeton University), Joel Hartman (Princeton University) and Allan Schmitt (Citizen Science), was published May 10 in the journal Science online, at the Science Express website. 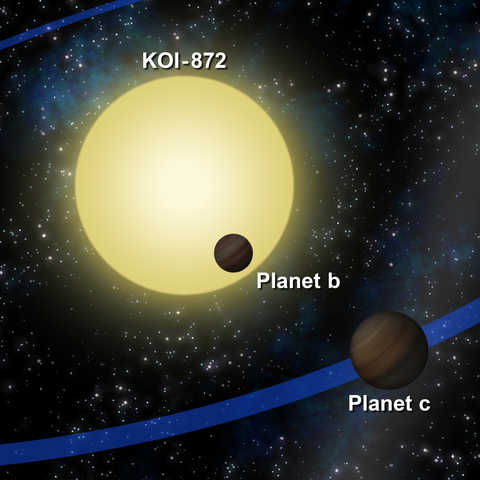 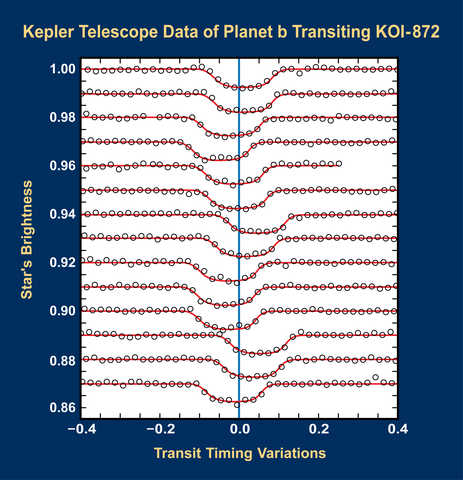